In a 100 radius, in the northern tip of Neve Tzedek neighborhood, lay two of the best steakhouses in Tel Aviv (and probably in Israel), NG and A Place for Meat. Though there are enough carnivores in the city to fill the both, there is probably an enormous competition between the two places which constantly receive very good reviews from all around. Strangely enough, until this day we haven’t visited a Place for Meat. And then we did.
As a bold move, unlike NG, A Place for Meat introduces a menu where Steaks are the only main courses. Yes, it might not fit everyone, and maybe it isn’t the whole family classic place, but if it is a good Steak you are looking for, in a very romantic atmosphere as a plus, this is a very good option. 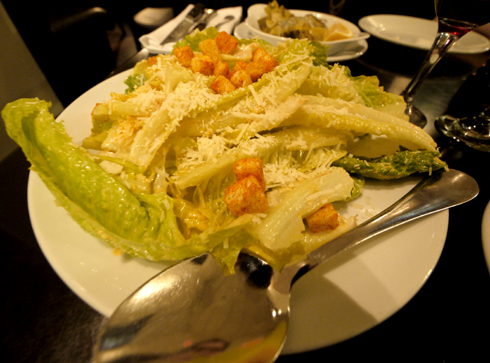 Caeser Salad
We did have some warm-up with starters such as Caeser Salad which was a classic dish that didn’t fill us up too much before the steaks, and the same goes to grilled Artichoke hearts in lemon and olive oil. Both of the dishes didn’t stand up as particularly good, but we didn’t mind as we were there to check whether the steaks are the best in town. 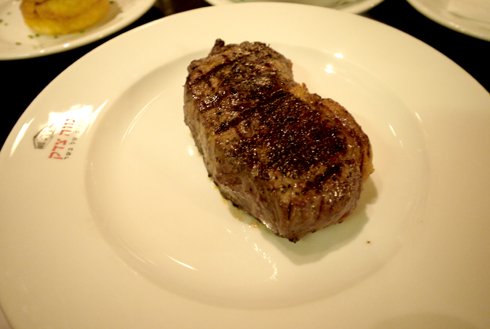 Fillet of Beef
How unoriginal from us, we both picked the same part of the beef, the Fillet of Beef. Usually, veteran carnivores will disregard this part while praise the hanger steak and the more meat-flavored parts, but even though, the Fillet of Beef remains a very popular steak, and we were reminded why. Both of the steaks had the desirable external crust while tender and “al punto” just as we liked. Was it the best steak in Tel Aviv? Probably. The sides, baked potatoes and a famous Tower of onion rings were very good and summed up a great steak dinner at a very lovely place.