Mizlala Restaurant , 57 Nahalat Binyamin , Tel Aviv Casual about everything except its Food in Zion


Celebrity chef Meir Adoni’s Mizlala is casual about everything but the food. 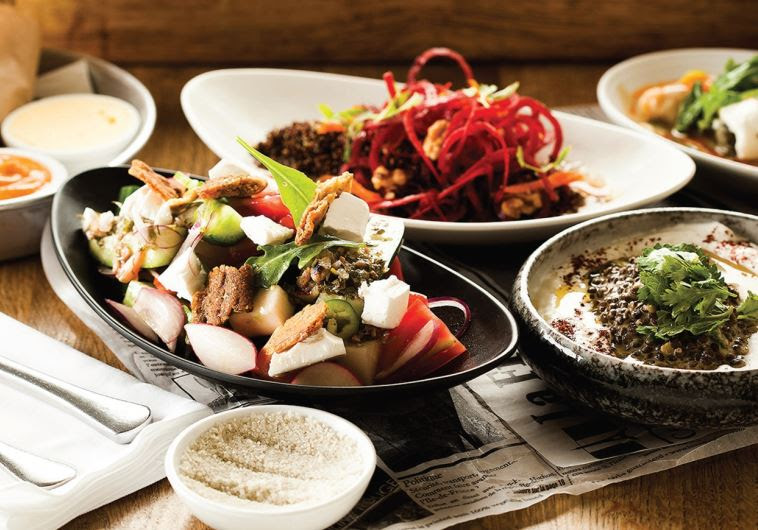 
Five years ago, chef Meir Adoni of the upscale restaurant Catit opened an eatery in Tel Aviv designed to be at the other end of the swank spectrum, as the name Mizlala (slang denoting “a place to stuff one’s face”) clearly implies.

There are as many seats at the long bar as at the wooden tables, and even a few outside on Nahalat Binyamin’s busy sidewalk. At the end of the incredibly well-stocked bar, the kitchen is visible through full-length picture windows, while ceiling fans hang from the very high ceiling. The atmosphere is bright and airy, an ambience reinforced by upbeat music, including oldies.

One look at the beverage menu answers the question of what the bar does with the dozens of bottles on view. There are no fewer than 12 special cocktails, and another list of classics. There is also a cocktail of the day at the half price of NIS 27.

We ordered Mizlala’s French Martini (NIS 57) and Guava Viento (NIS 49). The former – Grey Goose vodka, Chambord and pineapple juice, garnished with a sprig of fresh thyme – was smooth and fruity, once the raspberry liqueur kicked in. The latter – tequila, guava puree, triple sec and lime juice, garnished with two lemon wedges – was a refreshing, summery drink with a bracing citrus tang.

We were there to check out the restaurant’s new spring menu, so after choosing our drinks, we sat back and let the chef do the work of deciding what we should sample. There were three starters on the menu, and we were served all three, plus one that seems to rotate on and off the menu. The Hebrew and English menus are on separate sheets of paper, giving the impression that they are revised frequently.

The starters (NIS 19) were, in essence, familiar Israeli mezze.

In the latter two, the delicious sheep labaneh stole the show: velvety in texture and completely devoid of the sour bite so often characteristic of this dish.

The memula’im, meanwhile, looked like ordinary stuffed vine leaves but were actually a winning combination of tightly rolled vine and cabbage leaves filled with rice, atop a mixture of tomato butter, tehina and sheep labaneh. I often find this vegetarian version of stuffed vine leaves too vinegary, but these were just right. So good, in fact, that I didn’t even miss their not having meat inside.

Mizlala’s starters may be based on mezze that are commonplace in Israeli restaurants, but as the well-known disclaimer goes, any resemblance is purely coincidental. Adoni takes them to a whole new level, where they are in a league of their own.

Instead of pita, the starters were served with little slices of barely toasted bread in a small paper bag, along with soft butter and a mild red pepper aioli. It was hard enough to keep from filling up on the starters themselves, but it was worth the effort to save room for the main course. 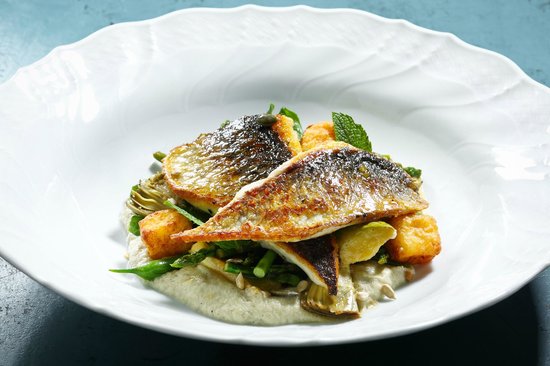 The main dish called Florence (NIS 107) was a fillet of red mullet sandwiched between thinly sliced toasted brioche and a generous portion of creamy polenta prepared with beurre blanc and Parmigiano Reggiano. The moist, flavorful fish was cooked perfectly, enhanced nicely by the buttery, cheesy corn pudding. In addition, there was a poached egg on the side. Breaking the yolk and mixing it with the polenta and brioche achieved what I thought was impossible: improving a dish that was already sublime.

The Asian beef (NIS 137) was a huge bowl brimming with cellophane noodles, hijiki seaweed, shiitake mushrooms, scallions and peanuts under a layer of succulent strips of veal fillet, all swimming in a heavenly oyster sauce sweetened with honey and enriched with crème fraîche. A masterpiece of fusion, this dish was enough to make me forget everything I thought I knew about Asian food.

Desserts (NIS 40) here were feasts for the eye as well as the palate. The New Middle East was an island of fresh seasonal fruit atop semolina and bharat cream, crowned with a scoop of blood orange sorbet and surrounded by walls of meringue and a moat of hyssop olive oil, garnished with yogurt crumble, strawberry compote and Thai basil. It was an inventive interplay of flavors and textures you don’t often find in a dessert.

Finally, chocolate lovers will have difficulty choosing between the two chocolate-centric desserts on the menu. Again, we left the choice to the kitchen, which, naturally, did not disappoint. The Cremo featured thick, rich dark chocolate custard studded with crunchy raspberry chips and decorated with dollops of lemonyuzu cream and raspberry coulis, all piled on a lotus cookie crust.

Mizlala, which is open daily from noon to midnight, offers a discounted business lunch every day, including weekends.

Whenever one chooses to go, the Adoni experience is certain to be a memorable one.