Mizlala Eatery - Over Priced versus Quality? Social Justice in Zion?


The summer of 2011 will (hopefully) be remembered for the uncompromising fight of the middle class in Israel against the economic policy of Prime Minister Netanyahu, that caused Israel to have almost the biggest gaps between the rich and the poor in the western world. The people of Israel demand social justice.

Adoni in Action
The Summer of 2011 will also be remembered as the summer in which Meir Adoni opened the Mizlala – his middle-class restaurant. Adoni, well recognized and appreciated chef had become famous after cooking at the top fine-dining restaurants in Israel 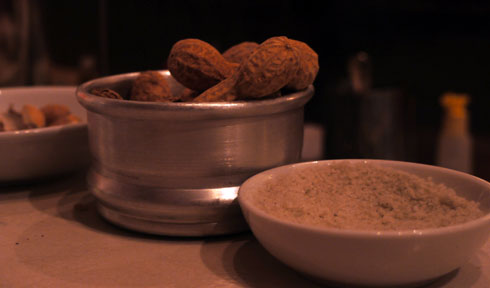 Peanut & Salt on the Bar
When Adoni opened this restaurant he stated that he aims to get to the young middle-calss crowd in Israel serving good food in reasonable prices. When we arrived to the restaurant we have realized we were the only couple that fits his measures.
As a place that suppose to act as an eatery (Mizlala), one would expect to encounter a loud and dense place with a chaotic atmosphere. Nevertheless, the design of the Mizalal is quite “clean” and sterile. Eatery with a high level design. To our surprise, Adoni was standing right behind the bar constructing our dishes.

Palestinian Tartar
We started with Palestinian tartar – if this is the meat you can get in Gaza, we can’t wait to have peace… Chopped rump beef, Tehini, Pine nuts, Yogurt, Burned eggplant paste & Cumin (just too much of it).  Great twist on the traditional tartar that usually comes with a French scent.

Mullet Ceviche
We continued with another starter (Although the menu is not divided to entrees and main courses) – Ceviche of Mullet fish that was served on top of some kind of Asian salad. This dish was good but had resembled to too many other dishes we have eaten in the past in restaurants such as the Thai House and The Officers Club. 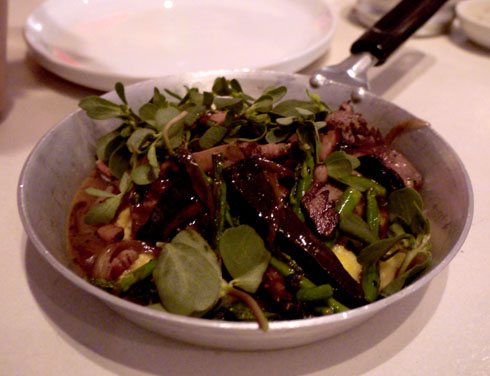 Seared Chicen Liver
For main course we have shared (not too big of a dish) the Seared Chicken Liver that was served on top of Polenta, Forest Mushrooms & Asparagus. This dish was amazing and we felt as if it was melting in our mouth.

Vanilla Brulee
For desert, we took Vanilla Brulee that had nothing to do with Brulee. It was a thick layer of Vanilla that was topped (and not burned) with a layer apricot that was topped with layer of Crumble. This layer was also topped – with a scoop of berries ice-cream – Too Much!! when the bartender asked us if we enjoy the dish we had to answer that this was the least good dish in that dinner. The bartender replied that this is Adoni’s interpretation to the Creme Brulee -we thought he was too creative.
Summarizing this experience we were a bit confused. It was (mostly) a good meal in a (sort of) reasonable price, nevertheless we could not identify the middle class people among the crowd. So where is the social justice?
The Check Please (2 people)
2 X Gewurztraminer – 72 NIS
Palestinian tartar – 55 NIS
Mullet Ceviche – 63 NIS
Seared Chicen Liver – 53 NIS
Vanilla Brulee – 41 NIS
All in all: 284 NIS
Summary
Food: Israeli Chef Restaurant
Price: Medium-Expensive
Location: Nachlat Binyamin
The Cizer-Kobrinsky Scale