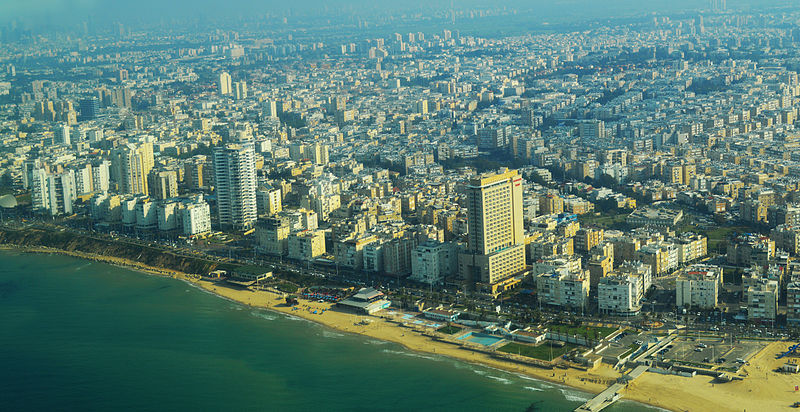 (audio) (help·info), Arabic: بات يام‎) is a city located on Israel's Mediterranean Sea coast, on the central coastal strip, just south of Tel Aviv. Part of the Gush Dan metropolitan areain Tel Aviv District, the city had a population of 128,498 in 2014.


Bat Yam was established in 1926 as Bayit VaGan (Hebrew: בית וגן; House and Garden). During the 1929 Palestine riots, the town was attacked by Palestinian fighters from Jaffa and was evacuated by British Authorities. In 1930, it was re-settled. In 1936, it was granted local council status and renamed Bat Yam. By 1945, 2,000 Jews were living in Bat Yam. According to the Jewish National Fund, in 1947 it had a population of 4,000.

Following the United Nations vote in favour of a partition plan on November 29, 1947 and the subsequent civil war, inhabitants of both Bat Yam and Jaffa complained on violent incidents, including sniping. 57 Palmach and Haganah soldiers resident in Bat Yam lost their lives during the War of Independence largely holding the Southern Front of Battle of Jaffa that started on 24th April ,1948 when 600 Irgun Soldiers were tasked with the capture of  Jaffa from the South and East in what was one of the most critical but ferocious and costly battles of the War of Independence of Zion.Along what is called today Hagvul , the border with Jaffa their still are numerous fortifications (pill boxes) from 1948 . A 14 story tower block plus two 9 story ones has been approved on the historic site where 22 Hagana members lost their lives fighting an attempted breakout southwards of Arab Jaffa fighters.( See corruption in city hall below)  On May 13, 1948, Jaffa surrendered to Jewish forces. In the years following Israel's creation, Bat Yam grew dramatically due to mass immigration and gained city status in 1958. A small Hasidic enclave of Bobover Hasidim, known as Kiryat Bobov, was established in 1959. The city gained a sizeable community of Jews from Turkey (est. 23% of the population). Bat Yam again experienced a period of rapid growth in the early 1980s to the late 1990s with the mass immigration of Jews from the former Soviet Union, and Ethiopia. There is also a fairly large Arab community in Bat Yam, both Muslim and Christian many of whom relocated from Jaffa. The vast majority of Vietnamese-Israelis or Vietnamese people of Israeli origin, live in Bat Yam. Urban development
During the month of October 2012, the legendary SUN hotel, on the southern part of Bat Yam's beach, was completely destroyed. Despite the strong objections of local residents, a forty-story hotel will be built, on the site  of the Sun hotel.

In 2008 the Bat-Yam International Biennale of Landscape Urbanism, which is devoted to re-examining urban spaces through art and architecture, was held in Bat Yam. In 2010 the second Biennale, "Timing" took place, which featured site-specific installations from designers and architects from around the world. The city has two shopping malls, Kanyon Bat Yam, which opened in 1993, and a smaller one on the promenade of Bat Yamon.

It is extremely ironic that the above met in Bat Yam.Urban development in Bat Yam is ripe with corruption and bribery. The last three  Mayors Saguy, Lahiani and Yossi Bachar ( under police investigation) have been convicted of bribery, corruption and tax fraud ( undeclared 'bribery' income)  and breach of public trust and for good measure racketeering.Each is/was accused of having close ties and partnership to the Russian Mafia Bosses active in Bat Yam. Over 55% of the inhabitants of Bat are  immigrants from the ex Soviet Union States with an extraordinary number who were permitted into Zion by false declarations of their Jewish heritage. Bat Yam is the center Messianic Christianity. Christian Russian immigrants have significant boosted the regular attendees of Churches in Jaffa.

Tourism
The location of Bat Yam on the Mediterranean makes it popular with beach-goers. Bat Yam has a 3.2 km (2 mi) long promenade along the ocean lined with pubs and restaurants. The city has six beaches, one of which is protected by a breakwater, the others by natural reefs . The Museum of Bat Yam exhibits contemporary art.[9] Other museums include the Ben Ari Museum and Ryback Museum that houses the work of Issachar Ber Ryback. There is also a museum in the memory of the Yiddish writer Sholem Asch, who lived his last years in Bat Yam, and a small Holocaust museum.

All bus lines in Bat Yam have at least one terminus in Tel Aviv, Rishon LeZion or Holon. Dan is the biggest bus company in the area. It operates frequent service to various neighborhoods of Tel Aviv, and also connects Bat Yam to Holon, Rishon LeZion, Ramat Gan, Giv'atayim, Bnei Brak, Tel HaShomer and Bar Ilan University. Egged connects Bat Yam to various neighborhoods of Holon and Rishon LeZion, and also operates service to Jerusalem, Tel Aviv, Ramla, Ben Gurion International Airport (part-time service) and intermediate communities. The Bat Yam-Yoseftal Railway Station and the Bat Yam-Komemiyut Railway Station have opened in 2011 as part of the new Tel Aviv – Rishon LeZion West line. Bat Yam will also be the terminus for the red line of the Tel Aviv Light Rail.
The city's major football club, Maccabi Ironi Bat Yam, currently plays in Liga Leumit, the third level of Israeli football. The club was formed by a 2004 merger of Hapoel Bat Yam (which had spent several seasons in the second division in the 1990s) and Maccabi Bat Yam. Bat Yam's Al Gal beach is regarded to be one of the best surfing spots in the region, having fairly consistent surf conditions, especially during the summer months.

Three highrise buildings have been approved on  the site of the 1948 War of Independence battle in Bat Yam where 22 Hagana and Palmach members lost their lives when Arab fighters attempted a southern breakout to flee( retreat) towards Gaza  . Within a 500 meter radius the Bat Yam Municipality have approved 6 high rise buildings and a further three are in advance stages of approval. Three small parks will be eliminated in these projects that will chronically add to the critical parking congestion. Access to all these projects is via the narrow Rechov Chana Senesh on way street off the one way Rechov Balfour Street. The excit out of this area is via Rechov Herzel  also a one way street heading northwards into Yefet Street. These projects are been built against the inhabitants of the apartment blocks they will replace and in the oldest sections of Bat Yam.

Local government and two decades of ongoing corruption in City Hall
In the early 2000s, following financial scandals under the leadership of Yehoshua Saguy, the city was on the brink of bankruptcy. In 2003 a new mayor, Shlomo Lahiani, was elected and the city began to rejuvenate. Large investments were made in education, culture and the appearance of the city.[specify]. In the 2008 municipal elections, Shlomo Lahiani was re-elected mayor of Bat Yam with 86% of the vote. In 2014, Lahiani pled guilty to three counts of breach of public trust after being charged with bribery and income tax fraud and was sentenced to a prison term. Lahiani hand picked replacement, Yossi Bachar is under police investigation on charges of racketeering, bribery and corruption and after the supreme court cancelled the result of the elections for Mayor in 2014 , voting irregularities were added to the charges piling up against him and the mafia he surrounds him with..Lihiani is also under investigation for the voting irregularities and breaking a court order that forbids him to be involved in politics of any sort for a decade.

Bat Yam is twinned with: