He was born in France, and served in their navy. At the age of 12 he watched the movie “Exodus”, which influenced him to a greater extent than he recognized at first. After considerable soul searching, he decided to dedicate his life to monastic work, much to the surprise and disappointment of his family. After 35 years, some family members still don’t speak to him, although he is one of the kindest, sweetest, most benevolent and most generous people I know. He is also a most unusual and outstanding Israeli.

Olivier chose to accept the rule of St. Benedict with its stringent requirement. Not only did he dedicate his life to worshiping God, he also made a series of vows, including a vow live his entire life in one chosen monastery. (“A life sentence” he jokes.) His road to becoming one of more than 8,000 Benedictine male monks in the world began with studies in a monastery in Normandy, France.

When time came to choose a monastery to call home, the Exodus influence led him to Israel, and in 1977 he went to serve in the Abu-Gosh Benedictine Monastery—one of the most beautiful Crusader buildings to have survived in Israel.

A Christian-Arab village built on a mountainside; the village of Abu Gosh was first settled over 6,000 years ago. The village is considered to be the place where Jesus revealed himself after his resurrection—that is, Emmaus. It is also the site of the Abu Gosh restaurant, which in January 2010 broke the Guinness Record for Hummus with a 4085Kg heavy Hummus plate

The monastery was built some 1,000 years ago, on the spot of the water spring, on the main road to Jerusalem, where by tradition and some evidence in Scriptures the Arch of the Covenant was resting for twenty years until king David relocated it to the Temple he built in Jerusalem (2 Samuel 6).

The remains of the Crusader Resurrection Church were restored by the French government and handed over to the Benedictine Order in the 19th century. Remnants of 12th century frescoes can be seen on the monastery walls, and a little spring flows out of the monastery crypt. (Read about this at http://www.travelujah.com/groups/entry/Abu-Gosh-Benedictine-Monastrery, which adds a few more words about Olivier, but does notexplain why “Olivier is charming, funny, fluent in a French accented Hebrew and very up-to-date in military slang”).

Several years after his coming to Israel, Olivier met the Israeli Army’s Education Corps officers on their visit to the monastery, as part a program conducted by the Israeli military to further understanding among Israel’s religious and ethnic groups. It was love at first sight.

The relationship that grew from that first meeting was astonishing. Olivier, with the consent of the Monastery Abbot, started to host visiting groups of soldiers, telling them about the monastery’s architecture and history.

I first met Olivier in 1993, while I was serving still in the military as the Commander of the IDF Main School of Education, in the IDF, an unusual military base located in the Galilee, on Mount Livnim, near the Druze village of Maghar. We befriended each other immediately, and our friendship grew through the years, despite the fact that Olivier seldom leaves the monastery grounds.

Olivier cherishes the IDF memorabilia I gave him as a special present. A certified IDF guide/teacher/expert, he combined them with the veritable sea of military insignia and other memorabilia given to him by thousands of visiting soldiers who were touched by his hospitality, knowledge and wonderful, warm heart, and created a museum.

Some 12 years ago, a group of religious politicians declared that Olivier’s work was missionary in order to prevent his obtaining Israeli citizenship. In Israel, non-Jewish long time émigrés can obtain citizenship on the basis of their loyalty, commitment and contribution to the State of Israel.

He was about to be granted citizenship when two articles accusing him of trying to convert Israeli soldiers to Christianity appeared in the press, putting his pending citizenship in jeopardy. Never involved in missionary activity, completely loyal to Israel, and very much wanting to become an Israeli citizen, Brother Olivier was hurt and disappointed. After many good Israeli (me included) protested on his behalf the press took up his cause and he finally received his citizenship. But he never opened his museum because somehow he thought that doing so would bring unwelcome attention placing him at some risk.

To learn more about this unique monk, make a detour on your next trip to Israel, stop at the monastery’s gate, ring the bell and ask for my very dear friend Olivier. If you want an extra VIP treatment (he treats all his guests as VIP’s), just mention my name.

I was pleased to welcome Brother Olivier as a guest of honor at my daughter Rotem’s wedding, a couple miles up the hill from Abu Gosh itself, last August. And he was pleased his abbot granted him special permission to be outside the monastery at night, and to speak and eat at the wedding


The Benedictine Monastery in Abu Ghosh, named St Mary of the Resurrection Abbey,] is a monastery run by the Olivetan Benedictine order. It is centered around the Church of the Resurrection, or Church of our Lord's Resurrection,built by the Crusaders in the 12th century on top of Roman ruins in the center of the village of Abu Ghosh, Israel. The Crusaders assumed for a while that the village, which they called Fontenoid and the Arabs called until the 19th century Qaryet al-'Inab, was standing at the site of Emmausfrom the Gospel of Luke. 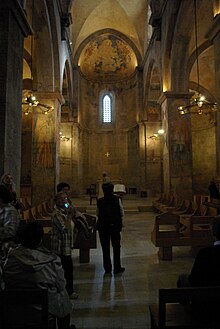 The late Romanesque/early Gothic-style church was built by the Hospitallers in 1140.[4] It was acquired by the French government in 1899 and placed under guardianship of the French Benedictine Fathers. Edward Robinson (1838) described it as “obviously from the time of the crusades, and [...] more perfectly preserved than any other ancient church in Palestine.” Excavations carried out in 1944 confirm that the Crusaders identified the site as the biblical Emmaus. The church is built over an ancient spring.

From 1956, the monastery was run by the Lazarist Fathers.

Today a double monastery of nuns and priests worship in the church and offer hospitality, commemorating the Old Testament story of the couple on the Jerusalem–Emmaus road.