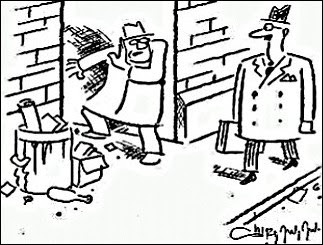 Are you a Liberal Zionist or an Israeli Meretz Party supporter or read the Anti Zionist Haaretz newspaper with gusto and zeal and having trouble fitting in with the Boycott, Divestment and Sanctions (BDS) movement with the height of leftist academic fashion? Hate Israel, but don't like boycotts? Like boycotts, but feel a little creepy singling out the world's lone Jewish state? Divestment not your cup of tea? Worry not, because the makers of BDS are out with a new line of products that will let you claim to oppose BDS even while letting it in through the back door.

The first model allows you to disagree with what BDS says, while fighting for its right to be heard.
The Open Hillel Academic Council was founded to contest the Guidelines for Campus Israel Activities of the Jewish campus organization Hillel, which bar its 550+ chapters in the US and abroad from hosting or partnering with organizations that "support boycott of, divestment from, or sanctions against the State of Israel."

Open Hillel claims that Hillel has been taken over by a coterie of donors with no "respect for academic freedom and who seek to enforce their own rightwing ideologies." Accepting BDS at the table, so goes the argument, will not only "restore critical inquiry" but also end Hillel's "stifling conversation about Israel-Palestine."


Among the growing roster of academics joining Open Hillel, some explain their membership by linking it to "open debate and deep intellectual inquiry" (Mira Sucharov) or claiming it provides students with "a place where they can hear lectures from people supportive and critical of Israel" (Aaron Hughes). As if rampant pro-Israel bias were a problem in academia today.
Open Hillel was created to force Hillel to work with the enemies of Israel, which isn't surprising given that one of the founders is Judith Butler, West Coast queen of the BDS movement.
The second form of backdoor BDS is a piecemeal version that rejects measures punishing Israelis collectively in favor of those that ostensibly target only the most "guilty."
The Third Narrative (TTN), a project of the American leftist Zionist group Ameinu (formerly the Labor Zionist Alliance), is focused on targeting the so-called "occupied territories," rather than the whole of Israel. Syracuse University Jewish Studies professor Zachary Braiterman, a prolific writer on this subject, denounces the American Studies Association's "blanket academic boycott on all Israeli universities and colleges" but applauds "more targeted...boycotts of West Bank settlements," like those of the European Union. The latter, which he calls "bds," reflect "international consensus that settlements are illegal under international law and constitute a violation of Palestinian human rights."
A related initiative, launched by Scholars for Israel and Palestine (SIP), seeks "individual sanctions" against public figures in Israel who "lead efforts to insure permanent Israeli occupation of the West Bank" in lieu of sanctions against the whole of Israel.

For many on the Jewish academic Left, the question of whether, and how far, to embrace the BDS agenda has become the defining issue of their careers, perhaps even their identities. Given the extraordinary pressures they face to disavow Israel, advocating "bds" is for some a defensive move that allows them to fit in without jumping on the bandwagon. Others suffer from what Dr. Kenneth Levin calls the Oslo Syndrome: "the recurring propensity among segments of the Jewish population to take to heart the indictments of besiegers and persecutors, and to ascribe to themselves the power to change dramatically the attitudes of their enemies by self-reform."
Whatever their rationale, I respect their choice. Since Professor Braiterman objected to my recent characterization of him as one of Syracuse University's "visible advocates of BDS," I will henceforth refer to him as a "visible advocate of bds."
But make no mistake, the growing numbers of backdoor BDS advocates are, wittingly or unwittingly, advancing the BDS cause. All of these "bds" currents implicitly accept the foundational premise of BDS – that Israelis and/or Jews should be singled out for unique treatment. After all, "individual sanctions" are tools applied only to the world's most odious regimes, and Open Hillel treats the one Jewish group on college campuses in a way that no other identity group is treated. As Andrew Pessinpoints out, no one would expect African-American groups to accept white supremacists to their ranks in the name of "intellectual inquiry" or "balance."
Singling out Jews in small ways only makes it easier to single them out in bigger ways. Haven't we learned this yet?
Posted by Unknown at 2:18 AM