Is anti-Zionism any different from anti-Semitism? The question is probably the most accurate seismograph we’ve got to measure where one stands on the ever-tremorous political grounds we all walk when we talk about Israel. Not that there’s necessarily any right or wrong answer; civil, well-meaning people can make arguments on both ends. Yes, because Jews and Jewish life cannot be reduced to the national aspirations of the Jewish state. No, because anyone denying Jews, alone of all the world’s nations, their right of self-determination is by definition a hater. It’s not an altogether useless debate to have, but it’s not the debate we’re having.

The debate we’re having, true to our times, is both dumber and more malicious, and it was on display this month as at least two of our finest institutions of higher learning, Stanford and Oberlin, treated us to the intellectual equivalent of watching a tightrope walker trip and go splat on the asphalt. Out west, a member of the school’s student senate argued that it was not anti-Semitic to argue that Jews control the media, the banks, the government, and all other social institutions. And in the Ohio enclave of righteousness, several Jewish students published a letter in a student newspaper defending a disgraced professor who had posted similar allegations on her Facebook page about the Jews’ malevolent omnipotence.

Both pronouncements are worthy of consideration. Like any good work of modern art, they’re one part parody, peenging poseurship at its most delightful, and one part dirge, announcing the death of good, rational thought. At Stanford, the portentously named Gabriel Knight, a junior on the school’s student governing body, claimed that it was, like, totally cool to talk about how the Jews control the world. “Questioning these potential power dynamics, I think, is not anti-Semitism,” sprach Knight. “I think it’s a very valid discussion.”

Not to be outdone, the Oberlin crew, five Jewish students strong, produced a manifesto that ascended from the declaratory into the definitional. “We are deeply troubled by the persistent conflation of anti-Zionism and anti-Semitism, which is not only ahistorical and unfounded but also plays a central ideological role in the attempt to undermine legitimate criticism of the state of Israel,” thundered the Gang of Five. “This conflation leaves us, as anti-Zionist Jews, without a community to turn to when we do experience anti-Semitism. We agree with the definition of anti-Semitism laid out by Aurora Levins Morales, a Jewish pro-Palestinian activist; she writes that anti-Semitism—writing about European Jewry under Christianity—functions by creating ‘a vulnerable buffer group that can be bribed with some privileges into managing the exploitation of others, and then, when social pressure builds, be blamed and scapegoated, distracting those at the bottom from the crimes of those at the top.’”

It’s an argument not even a Deconstructionist could love: Anti-Semitism isn’t the historic hatred of Jews, consistently documented for millennia and rooted in ancient theological fissures, but merely a conspiracy by unnamed rich Christian Europeans to elevate the Jews into disproportionate positions of power and influence merely to blame them later when the oppressed wise up and revolt.

If you’re tempted to crack a joke about some poor parent out there who is paying $49,928 a year just so Junior can receive the intellectual equivalent of an ischemic stroke, don’t. The Stanford and Oberlin debacles are not isolated cases of idiocy; they’re indicative of a bigger moral failing well worth our attention. Call it—we’re talking about the life of the mind, after all—the reductio ad absurdum of the debate over Israel: Arguing at first that anti-Zionism isn’t anti-Semitism, the enlightened left has now taken to arguing that even anti-Semitism isn’t anti-Semitism but, to put it in academese, a permissible form of discourse about power and privilege.

You hardly need a Ph.D. to know what all of it means. It means that it’s now OK for the students and professors of our finest universities and colleges—and, by extension, for all of polite society—to entertain vile stereotypes that, as recently as five or 10 years ago, were on display nowhere outside the Sieg Heil! fringes of the rabid right. It’s a development the pedants who fill the Ivory Tower are likely to dismiss as yet another obstreperous bit of reality getting in the way of pristine theory, but the rest of us should pay attention and learn two key lessons, and quick.

The first lesson is that it’s time to do away with the Anti-Zionism is Anti- Semitism . Whatever its intellectual merits are, or were, it’s largely irrelevant in an environment scorched by the flames of prejudice masquerading as thought. To ponder minute differences when students are fulsomely supporting the sort of stuff that would’ve made Henry Ford blush is like debating nautical safety long after the iceberg has been introduced to the Titanic’s hull.

It’s a painful and difficult realization—most of us thoughtful cats crave nuance and strive to see the world in all its complicated glory—but the second lesson is harder still: Hate has no patience for fine points. Those folks—earnest, no doubt—who argued that professing the Jewish faith did not necessarily entail supporting the Jewish state’s right to exist should look at the recent news as into a mirror. They could start by reading the editor’s note affixed to the Oberlin students’ letter, correcting the initial impression that the five who supported the hateful professor were members of Students for Palestine, or SFP, a pro-Palestinian on-campus group. “SFP,” read the correction, “refrains from actions or letters on Jewish students’ behalf, given that it is a Palestine solidarity organization.” In other words, SFP itself is admitting what its Jewish supporters will not, namely that the struggle isn’t between those who support Israel’s right to exist and those who, regardless of their faith, oppose it, but between Jews and those who find their existence as noxious in Ohio as they do in Or Yehuda. If you’re Jewish, SFP bluntly states, you can’t support the pro-Palestinian movement, because the pro-Palestinian movement is currently predicated on the belief that Jews alone of all people should be singled out for calumny.

Those who believe Jews control the media and the banks, or that it’s OK to respectfully debate whether or not they do, make no distinction between the good, enlightened Jews who wash their hands of Israel and the bad ones, who have the temerity of adhering to their faith and their nationality like any other normal people in the world. And those Jews who believe that their liberal sophistication will somehow save them from the wrath of bigotry should strongly reconsider: Never send to know for whom the anti-Semites troll; they troll for thee.

But let me finisg with a rethorical question.... are we Zionist Jews too sensitive . Are we over reacting.? Is there some basic for the debate and equation? 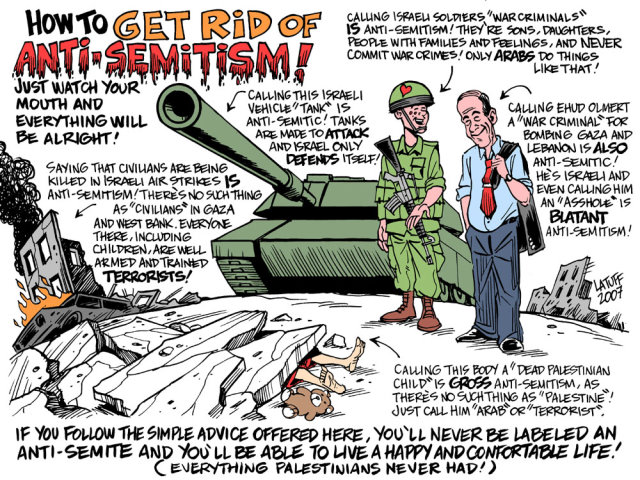