Antibes Restaurant Manhattan.... a long and unusual culinary road from from Mea She'arim in Zion

One of the delights served up at Eyal Tov's Manhattan French restaurant Antibes.Sasha Gitin
Eyal Tov, 34, was born to a ultra-Orthodox family in Jerusalem’s Mea She’arim neighborhood. “Yes, with sidelocks and tzitzit,” he says.

At age 14 he decided to abandon religious observance. Now he’s the owner of the French restaurant Antibes, the popular bar Schapiro’s and a falafel shop, all in Manhattan’s hip Lower East Side. It would be a shame to miss any of them if you’re in the area.His  road to New York was an interesting one.

“At age 14 I concluded that I was feeling suffocated and abandoned religion,” he says. “I moved to Tel Aviv, worked as a model, acted at the Tmuna theater, appeared in ad campaigns and was a photographer’s assistant,” he recalls.
He found his connection to food at the first branch of Cafe Cafe, now a major coffee shop chain, where he worked and eventually became an active partner. Then he decided to move to New York. His mother is American, which made the move relatively smooth.

But his start there wasn’t easy. Initially he worked as a furniture mover, like many Israelis in the Big Apple. He and his brother organized parties, which brought in some money. They had various business ideas that never developed. And then he decided to open a French bistro.

“I’d been to the city of Antibes on the French Riviera, and I very much liked it. The city has a strong connection to art, culture and the Mediterranean. It reminded me a bit of Tel Aviv, and I thought that a restaurant inspired by this city could find a place in New York. I launched the restaurant and later took on David Shemesh, who studied at Le Cordon Bleu and became our chef.”

Tov opened the restaurant in the Lower East Side, where he lives and was the first stop in the United States for tens of thousands of Eastern European Jewish immigrants during the early 20th century. “I love this neighborhood, with its atmosphere, its energy and its connection to New York history,” he says. 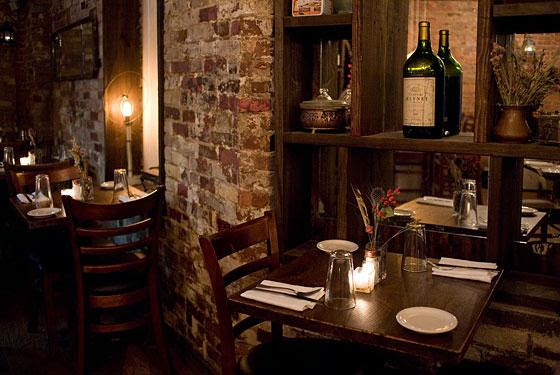 Once the Jewish immigrants became more established, they usually moved out to greener pastures and were replaced by groups of other immigrants. The neighborhood began to revive around 15 years ago, as artists, yuppies and hipsters began moving into the neighborhood, turning it in a popular entertainment spot for young people. Hotels and galleries have been springing up and real estate has skyrocketed.

Antibes, located at 112 Suffolk Street, is Tov and Shemesh’s flagship restaurant. The lighting is dim, it has an exposed brick wall and the floors are wood. The atmosphere is pleasant, with 1960s music playing in the background.

My favorite appetizer was the beets with goat cheese, roasted nuts and herbs. Other menu items include asparagus with wild mushrooms, creme fraiche and crispy Parmesan; grilled octopus; and goose liver pate served with caramelized pear and aged balsamic vinegar, micro leaves and port. My favorite dish was the grilled branzino fish served with artichoke hearts and a sesame-green garlic crust. I also recommend the melt-in-your-mouth Guinness-braised short ribs, served with a potato gratin and spinach.Notable desserts include the halva kadaif, an espresso mascarpone with curled halva and pomegranate sauce.

Five minutes away by foot is Schapiro’s, at 120 Rivington Street, one of the Lower East Side’s main streets. Unlike Antibes, Schapiro’s is colorful and noisy. The site was the home of Manhattan’s last winery – and a kosher one at that, Tov notes.

He sought to turn the site into a bar while preserving historic elements from the old neighborhood, he says. The walls bear prints from an old printer, there are lights from a subway station, and the bar even sports a large menorah. Tov promises patrons great cocktails.

“Our barmen don’t just mix drinks. The level of our barmen is such that they know as much as the chefs.”

For those who prefer wine, the wines are all American, as are most of the beers on offer. “We wanted to preserve the American character of the place,” Tov says.

If it’s food you want, Schapiro’s, which is open until way past midnight, offers matza ball soup, with the matza balls made from matza meal from Streit’s, once the only commercial matza bakery in the city and also formerly located in the neighborhood. Shemesh is the chef here, as well. The menu includes other typical American fare, like meat loaf and steaks.

On the other side of Rivington Street, at No. 127, Tov has another eatery called The Falafel Shop, which he opened with his brother Elnadiv. Here you’ll hear lots of Hebrew. Maayan arrived only a few months ago from Israel and the confectioner, Zacharia, comes from France.

We began with a freshly squeezed drink called The Beat, comprising beets, carrot, apple, celery and ginger. You can also have a local version of sabich, and of course, falafel and hummus. The pitas are imported semi-frozen from Angel’s Bakery in Jerusalem and baked on the premises. The menu also lists shakshuka and salads.

Given that Mediterranean and Middle Eastern food has become increasingly trendy in New York, Tov plans to open another falafel shop on Second Avenue, not far from the Israeli consulate. “I believe we can further develop the falafel business and open more branches,” he said.
Only recently, he added, The Falafel Shop became kosher, “which is bringing a clientele here that didn’t come before.”

So where does he stand with regard to religion nowadays?

“I’m not religious and I don’t wear a kippa, but I put on tefillin [phylacteries] every day. Today I’m more of a believer than I was in Israel. When you live in Israel, your Judaism is self-understood. After many years of living abroad, my faith has actually strengthened.”
Antibes, 112 Suffolk St, New York, NY 10002; Shapiro’s. 120 Rivington St; The Falafel Shop 127 Rivington St, New York, NY 10002