B'TSelem..... Know the enemy within Zion 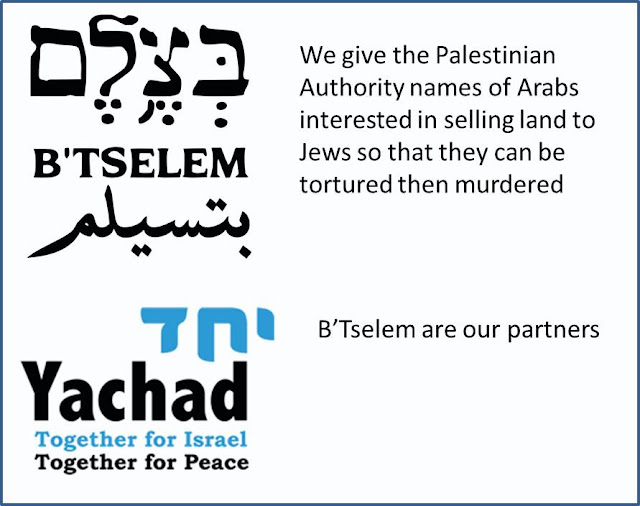 Cameos of Zion  publishes the below Blog from B'Tselem's website ( unedited)...the 7th in the series," Know the enemies within Zion"  I am no supporter of B'Tselem but NGOs like this play an important role within the Democracy of Zion. Unlike many other NGOs B'Tselem reports are well documented  and academic and their Interactive Maps are the best their are of the West Bank and Gaza. Ironic that even the IDF uses them ( sometimes)
In 2007, B'Tselem’s Video Department launched its innovative camera project. The organization distributes video cameras and provides training to Palestinians living in areas in the West Bank, East Jerusalem and the Gaza Strip where tensions are high and clashes are commonplace.


Video footage collected by volunteers provides ongoing documentation of human rights violations and the cameras expose the Israeli and the international publics to the reality of life under occupation.

The cameras provide a protective presence, contribute to deterrence and help to curtail violence: “The project gave me confidence. I used to walk down the main road and be afraid, but today I feel safer… Before we had cameras settlers would come almost every day, and now it only happens rarely.” (Mahmoud Dana, Hebron).

Video footage also serves to combat impunity and promote accountability. Visual images are uniquely capable of challenging official denials of violations and are able to attest to the impact of government and military policies. B'Tselem uses the footage as a basis for its complaints to the army and the police following suspected human rights violations. In some cases, the footage provides vital evidence in legal proceedings and has served to release Palestinians who were wrongfully arrested.

Footage taken by the volunteers is frequently broadcast by Israeli and international media, exposing incidents that previously remained concealed. The shooting of a bound and blindfolded Palestinian demonstrator, attacks on Palestinian farmers in the southern Hebron hills, violence by security forces against minors in Hebron and unlawful use of crowd control weapons against civilians demonstrators are just some of the events that have been filmed and distributed in the context of the project.

By participating in the project, B’Tselem volunteers acquire valuable skills that they can utilize to their personal benefit and to the benefit of their communities. B’Tselem provides advanced training and personal mentoring for especially skilled and motivated video volunteers, enabling them todocument their daily lives under occupation.

In June 2009, the project won the British One World Media Award for its groundbreaking work in the field of citizen journalism. B'Tselem was awarded the prize in the “special award” category, given to an outstanding media project or organization working on the ground in the developing world, which has made a real impact on the lives of those living and working around them. In December 2012, B'Tselem won first prize in the Freeform Documentary category of the 2012 documentary film competition of Israel’s Documentary Filmmakers Forum.
Posted by Unknown at 9:57 PM