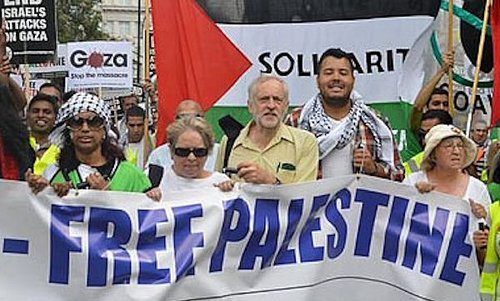 Jeremy Corbyn at a pro-Palestinian rally in London, 2014.

When senior party members spout vile anti-Jewish theories and at the same time insist they are in no way anti-Semites, they truly believe they are not lying.

After Labour suspends former London mayor Ken Livingston and other members of Parliament after he said Hitler supported Zionism,Jeremy Corbyn denies U.K. Labour has anti-Semitism .The British Labour Party is in a fight for its very soul against anti-Semitic anti-Zionism.A year ago, at the height of the general election in the United Kingdom, there was much focus on racism in British politics. The discussions concentrated almost exclusively on the anti-immigration United Kingdom Independence Party, whose leaders were accused of incitement against immigrants; some of its members, including party candidates, were found to have made downright xenophobic and racist statements in the past. The racist stigma was effective, as in nearly every interview, UKIP members or supporters felt the need to preface contentious statements with “I’m not racist, but…”

In recent days, the political scene in Britain is once again gripped by controversy over racism. This time, however, the party under spotlight is the left-wing Labour, once a proud bastion of the fight against xenophobia and racism. Now its members are compelled to announce that “I’m not an anti-Semite” in every tense interview. In every discussion of the its new leader’s own views, commentators need to add the qualification that “Jeremy Corbyn himself isn’t antisemitic, but…” How has the party which once stood up for the marginalized and downtrodden come to this?
Every few days for the last couple of months, a new name of a Labour activist who has been engaging in Jew-baiting and "Zio"-conspiracy theorizing on the internet emerges in the media. Those activists were summarily expelled or suspended from the party and it was still possible for Labour’s leaders to insist they were a tiny handful of misfits, not a structural or ideological problem for the left. But last week was different.

Not only are the two latest party members to be expelled for anti-Semitic remarks — member of parliament Naz Shah and former mayor of London Ken Livingstone — much more senior than those who preceded them, but Shah was a rising young Labour star and Livingstone, a stalwart of the party’s hard left wing for over four decades.
In Livingstone’s case, there was no need for Labour’s political enemies to trawl through his Facebook and Twitter accounts to find rogue postings and tweets from past years. No one forced him to make a round of television and radio interviews on Thursday and serve up an apologia of Shah’s 2014 Facebook remarks. She had already apologized profusely, resigned from her position as an aide to Labour’s Shadow Chancellor and been suspended pending further investigation.

Britain's opposition Labour Party leader Jeremy Corbyn gives a speech on Britain's membership of the European Union in London, Britain April 14, 2016. Stefan Wermuth, Reuters
So why did Livingstone feel he still had to defend the statements Shah herself had disowned? And how could he have imagined that it would improve matters by saying Hitler had been a Zionist because in the early 1930s he was in favor of banishing German Jews to Palestine (Livingstone called it “Israel” though of course Israel did not exist then, but historical accuracy obviously isn’t his forte), only then “went mad” and a result 6 million Jews were killed? His historical version of the Holocaust was only slightly more bizarre than his contention that someone who only hates Jews living in Israel — but not outside it — cannot be considered an anti-Semite.

The only thing more astounding than Livingstone’s claims was the long, agonizing hours it took for Labour’s leadership to announce that he was suspended from the party. This agonizing, according to numerous credible reports, was due to the fact that at least some in Corbyn’s inner circle were adamantly opposed to suspending Livingstone and actually argued that what he was saying was true. They failed to prevent his suspension but extracted one “achievement”: Labour MP John Mann, a veteran campaigner against anti-Semitism who angrily berated Livingstone on television for being a “Hitler apologist,” was also reprimanded for having a public argument with another member of the party. Apparently the incongruence of Mann being censured for having the decency to say to Livingstone what his party’s leaders should have said was lost on them.

As for which side of the debate Corbyn himself falls on, that became clear later that day, when he said he did not feel there was a crisis of anti-Semitism in Labour. Twenty-four hours later he was forced to change tack when he announced an independent inquiry into anti-Semitism within the party.
Perhaps the best way to understand how Labour found itself in this sorry state is to begin with the premise that when senior party members are capable of spouting vile anti-Jewish theories and at the same time insisting they are in no way anti-Semites, they are not lying, at least in the sense that they believe what they're saying to be true. This is not just the classic “some of my best friends are Jews” self-deception (and the radical left always had and still has its Jews to prove that point), but part of a deeper logical multiple-car pileup which now forms the basis of the attitude towards both Israel and Jews in general on a growing margin of the ideological left.

The unspoken argument begins with the belief that Jews are no longer an endangered minority group and have involved instead in to a powerful “white” elite. It doesn’t matter that this sounds dangerously like classic anti-Semitism. As far as those whose world-views are informed by a Marxist class-warfare perspective think, Jews went over to the dark side when they were no longer persecuted and joined the middle and upper-classes in their societies. Livingstone certainly believes this, as only four years ago, during his losing campaign to be re-elected mayor of London, he told a group Jewish Labour members that he wasn’t expecting London’s Jews to vote for him as they were wealthy and wealthy people didn’t vote Labour anyway. He refused to apologize as he simply couldn’t understand why anyone would find that offensive.

Leading from this argument is the next one, which places Israel and Zionism on the wrong side of colonialism, and therefore relics of shameful racist Western history which has no moral justification. This argument ignores basic historic facts — that the great imperial powers had no interest in establishing a Jewish state, and that a majority of the early immigrants to Israel were refugees who came from the Arab countries, not as colonists but as Jews who had nowhere else to go. But since Jews are now identified as part of the “white elite,” today’s far left has revised history. It has nothing to do with the occupation of the Weat Bank and precious little to do with the suffering of the Palestinians; it’s just a new element of contemporary left-wing thinking and therefore, in the minds of those who believe in it, not anti-Semitism.

And because the very existence of Israel and the entire Zionist ideal of establishing a Jewish state is considered inherently imperialistic and immoral, then when those who believe in these arguments say “being anti-Israel doesn’t mean you’re anti-Semitic”, what they actually mean is that “being anti-Israel can never be anti-Semitic.” As Livingstone said on Thursday, it’s not anti-Semitic to hate Jews in Israel. In other words, it’s only anti-Semitic if you hate the few “good” Jews who oppose Israel and who aren’t too wealthy to vote Labour.

And while not long ago this warped logic was on the margins of the party, with Corbyn’s election as party leader last year, it has now entered its mainstream, making anti-Semites feel at home, even though no one can seriously claim that the majority of the party’s members subscribe to these views. As it is, Corbyn and like-minded colleagues who see themselves as “anti-racist” and their political rivals as morally evil are incapable of comprehending that anti-Semitism is even possible within their ideological ranks. Corbyn doesn’t see this as a “crisis” because for him it truly isn’t; it’s just the media treating him unfairly.

A large number of Labour’s parliamentarians insists that Livingstone, who continues to insist that his remarks were both factual and correct, should not just be suspended but expelled from the party. But for Corbyn and many of his closest allies, this would be ideological capitulation. There was a long list of policy issues which could have split Labour under Corbyn — nuclear disarmament, nationalization of public companies, Britain’s relations with NATO and Russia — and it’s unfortunate for British Jews that they have now been dragged into the center of what is essentially a political battle between party factions. Jews are of course used to being targeted whenever racism rears its head around the world, but few ever expected they would have been a target in Britain’s Labour.