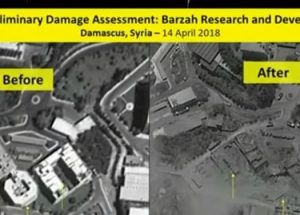 US airstrike on Syria before and after, screenshot from YouTube video

While the purpose of the US strikes was to target Syria’s chemical-weapons capabilities, the relatively modest scale of the strikes are an indication of Russia’s ability to cause Western powers to limit their actions.

The purpose of the strike was to damage Syria’s chemical-weapons program and to deter the murderous regime in Damascus from unleashing further chemical weapons on the civilian population. Yet in actuality, the strikes are more of an indication of Russia’s success at causing Western powers to limit their actions and opt for extreme caution in their response to Assad’s crimes against humanity.

Russian officials made explicit threats to shoot down US missiles prior to the strike and even to target the missile-launchers. These threats are part of a wider Russian posture aimed at showing the entire world – and the Middle East in particular – that Russia stands by the Assad regime no matter what horrors it unleashes.

Russia’s actions are guided by a cold, hard logic. By standing firm alongside its Syrian client, it is broadcasting the message that any Middle Eastern actor who partners with Russia will gain the essentially unconditional backing of a major power. Between the lines, the Russian message seems to be, “How can you trust the fickle West and the US, which abandon allies or leave them to fight alone? Join our sphere of influence and you will receive real backing.”

This kind of posturing is part of Moscow’s attempt to rebuild its global empire and boost the value of its currency as a superpower ally. There will likely be regional actors who will pay attention to this message.

As for the strikes themselves, they will probably have minimal, if any, impact on overall events in Syria.

The reason the Assad regime uses chemical weapons is because it is engaged in a war against Syria’s Sunni Muslim population, and it is attempting to ethnically cleanse whole areas of communities deemed a threat by the regime.

The Assad regime makes no distinction whatsoever between armed combatants and innocent civilians living in the areas from which the rebels operate, viewing them all as threats to its existence. This is why it repeatedly uses chemical weapons on entire neighborhoods, as well as conventional weapons, committing mass murder and trying to get the rest of the population to flee – preferably, from Assad’s perspective, out of the country.

Already, the Syrian refugee exodus is the worst since WWII. Out of an original population of 22 million people, more than half have left their homes. Of those, half are internally displaced, and around half have left Syria’s borders. The majority of these refugees are Sunni.

The Assad regime is from the minority Alawite sect, an offshoot of Shiite Islam, and the fact that millions of Sunnis are fleeing the country suits it just fine. This strategic shift in the country’s sectarian balance serves Assad’s long-term goal of strengthening its rule. It will continue to work towards this goal by terrorizing and butchering the Sunni population, and by dwindling its numbers by forcing people to leave Syria.

As a result, Europe should expect further waves of Sunni Syrian refugees.

The Assad regime has the backing not only of Moscow, but also of a regional and radical Shiite power: Iran. An array of Iranian-led Shiite armed forces are deployed across Syria, where they oversee the brutal campaign against Syria’s Sunnis.

Striking three chemical-weapons targets in Syria will not change this.

Meanwhile, Syria is also becoming an active combat arena between Iran and Israel. This front is growing more explosive and tense with time. Iran is trying to convert its military assets in Syria into bases of attack against Israel. Jerusalem is showing resolute determination to stop this from happening.

The Israel Defense Forces recently announced that an Iranian drone that flew into Israeli airspace in February and was shot down by the Israeli Air Force was armed with an explosive and was on its way to conduct an attack inside Israel.

This represents the first known time that Iran has attempted a direct armed strike on Israel from Syria, rather than its traditional attempts at organizing attacks via proxy.

The recent reported Israeli airstrike on an Iranian-run military base in central Syria, which purportedly was used by the Iranians to operate drones and threaten Israel, appears to represent Israeli self-defense. The goal is to stop Iran from turning Syria into a forward base of aggression.

In the aftermath of the strike, Iranian officials have been issuing threats of retaliation against the Jewish state.

Israeli defense officials have reportedly responded by saying that if Iran makes good on its threat, the whole of the Assad regime could be destroyed in the subsequent Israeli response.

These events represent a high-stakes struggle between Tehran and Jerusalem, with Iran pushing and testing Israel’s red lines and Israel enforcing them consistently. If Iran pushes too far and disregards Israel’s warnings, this low-profile war could turn into a major regional conflict.
Posted by Unknown at 2:24 PM No comments:

Citizens and Democracy in Zion 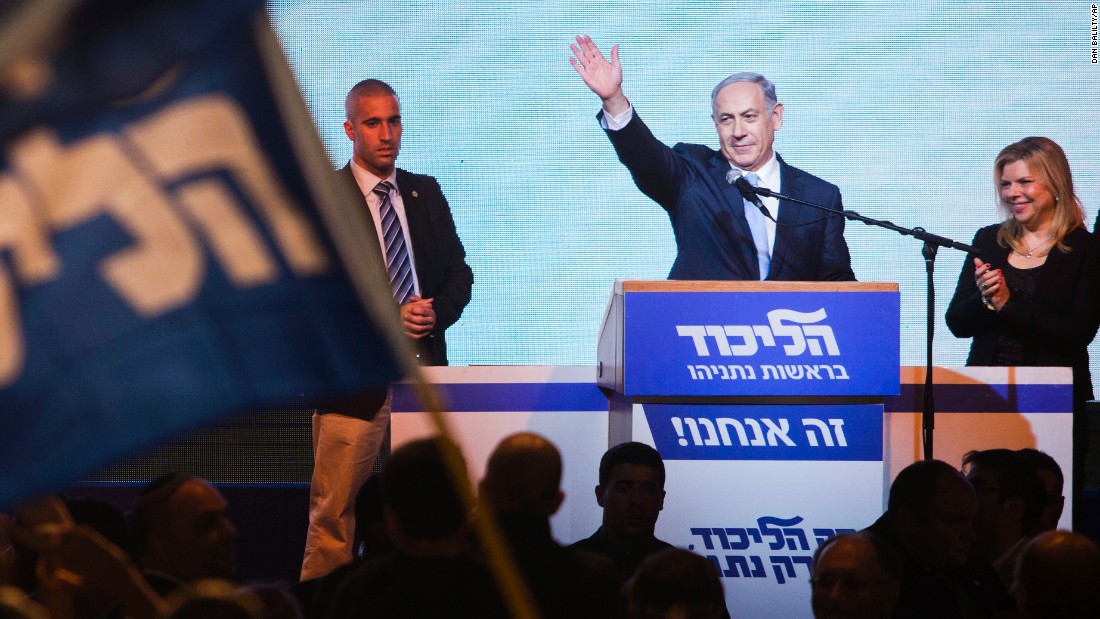 If Benjamin Netanyahu is forced to step down from his position as prime minister without sufficient evidence proving him to be guilty of criminal activity, the country will lose an experienced and capable leader at a time of growing danger. The elites who are so eager to push him out should consider whether their wish to install an individual more to their tastes is worth the possible cost to Israel’s security.
Winston Churchill was right when he said in 1947 that “democracy is the worst form of government ever invented – except for all those other forms that have been tried.”  One of the reasons is that sometimes a democracy will fail unless its citizens act maturely despite inclinations tempting them in another direction.  “Democracy” here means all the processes and behavior that determine what happens in the governance of a liberal democratic country such as Israel.
Israel’s democracy is now undergoing such a test.  Our region is in a time of bloody turmoil and instability. Israel, despite its great strength, faces dangers that require it to act prudently, wisely, and perhaps forcefully to protect itself from rapidly changing security developments.
Fortunately we have a prime minister who is widely recognized as one of the most eloquent and capable statesmen in the world today. With that said, no one would claim that he makes no mistakes or that Israel’s policy cannot be improved.
Partly because of Netanyahu’s unique experience at the center of affairs for many years, and the opportunities he has had to build relationships with leaders such as Putin, Trump, Modi, and Abe (of Japan), it is clear that no other Israeli today is anywhere near as capable of running Israel’s foreign and security policy as is Bibi.
On the other hand, a great many Israelis scorn and disapprove of the prime minister. Even many of his admirers see him as a man of poor character – small-minded, selfish, miserly, and disloyal, unable to create and maintain close relationships with strong people and political allies (with the striking exception of Ron Dermer). Perhaps most of all, Bibi’s hedonistic lifestyle – apart from his strong work ethic — offends many Israelis who contrast it with that of Begin, Rabin, and other Israeli political leaders of the past.
If it turns out that Bibi is guilty of real criminal conduct, as distinguished from technical violations of law, Israel would of course have to do without his foreign policy talent and experience. Perhaps there is still a possibility that the extraordinary efforts to bring Bibi down, by his long-time enemies in the media and the police, will prove that he genuinely is a criminal whom Israelis cannot in good conscience leave as head of government. But so far what is apparent is that a very small fire can be used to make a lot of smoke. Much of Israel’s establishment uses double standards to pursue partisan goals at the cost of weakening their prime minister’s ability to do his job.
Israel’s democracy – its voters, politicians, media, and police – must decide whether the prime minister shall continue to be the man by far most capable of protecting the country in particularly dangerous times, or will be replaced by someone whose personal character is felt to be less objectionable – especially to leftists troubled by having to face a man of the right who is obviously smart and sophisticated. Experience suggests that if Bibi is replaced as PM we cannot assume that his successor will necessarily be a person of better character.
On present evidence, if Netanyahu has to step down now it will be a failure of democracy. It would be a profligate decision to prefer a more appealing national leader over a determination to put the country’s safety in the best hands available.
One possibility is that the police, media, and elite attacks on Bibi will force him to have an early election which returns him to office, perhaps with an increased majority. That would be a case of democracy succeeding through the wisdom of the voters defeating media and legal system leadership. Still, despite their defeat by the citizenry under those circumstances, that elite would have inflicted great costs on the country by an unnecessary election and the diversion of much of Netanyahu’s time and energy from his job.
Of course Bibi will not live forever, and no person is indispensable. Sooner or later Israel will have to find a new prime minister.  If necessary, Israel will get through the present and future dangers without Netanyahu. But a maturely prudent democracy will take advantage of Bibi’s special talents and experience as long as it can, even if it dislikes him.
Posted by Unknown at 12:15 AM No comments: