Be Be See Blickered on Politics in Zion 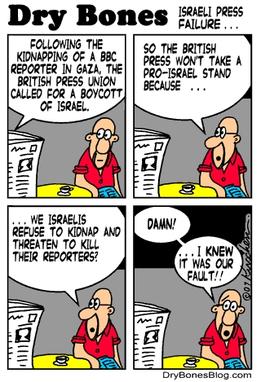 A particularly lively and fast-moving week in Israeli politics came to a head last weekend with the resignation of Defence Minister Moshe Ya'alon - but that event is only one part of a much wider story.
Long-standing talks (mentored by foreign parties) aimed at bringing the Zionist Union party into the coalition government were still in progress on May 17th despite internal opposition in Yitzhak Herzog's party.
"At the same time, Herzog excoriated former Labor head Shelly Yachimovich for trashing every effort to find common ground with Netanyahu and broaden the government, calling her the "radical left." Indeed, many Labor legislators have been attacking Herzog lately, accusing him of "crawling" into the government without even waiting to see what policy modifications he could extract from Netanyahu. Then, in domino-like fashion, half of Herzog's faction made clear that they would not go with him if he joined the government, making his unity bid even less attractive to others."
Herzog's decision to abort the talks on May 18th brought calls for his resignation from some of his party colleagues. The Jerusalem Post reported the subsequent events as follows:
"In a day of political upheavals, Prime Minister Benjamin Netanyahu went from a stalemate in coalition talks with Zionist Union chairman Isaac Herzog to reaching a preliminary deal with Yisrael Beytenu leader Avigdor Liberman in just 16 hours.
In a meeting that lasted less than an hour Wednesday afternoon, Liberman accepted Netanyahu’s offer of the defense and immigration and absorption portfolios and support for key Yisrael Beytenu- sponsored legislation. […]
Netanyahu updated Defense Minister Moshe Ya’alon immediately after meeting with Liberman. While it was not final Wednesday night, a source close to Netanyahu said Ya’alon is likely to be compensated by becoming foreign minister, but Ya’alon’s office said he had not yet been offered the post. […]
Talks with Yisrael Beytenu began after negotiations with the Zionist Union failed to progress.
Netanyahu met with Herzog until 1 a.m. late Tuesday night but failed to reach agreements on diplomatic issues.
In a Tel Aviv press conference, Herzog blamed the failure to reach a deal on Netanyahu refusing to write down his commitments on diplomatic issues.
But Likud officials said Herzog had not succeeded in drafting the support of any MKs in his 24-MK faction …"
On May 20th Moshe Ya'alon announced his resignation from the government and the Knesset. Only then did the BBC begin to report the (still far from concluded) story with an article which appeared on the BBC News website's Middle East page under the headline "Israel politics: Defence Minister Moshe Yaalon resigns in protest". 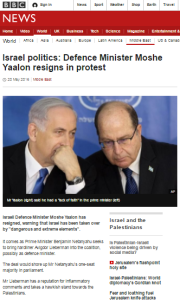 The original version of that article opened:
"Israeli Defence Minister Moshe Yaalon has resigned, saying he lacked trust in Prime Minister Benjamin Netanyahu.
It comes amid moves by Mr Netanyahu to bring hardliner Avigdor Lieberman and his party into the ruling coalition, likely offering him the defence post."
That introduction was subsequently amended to read:
"Israeli Defence Minister Moshe Yaalon has resigned, warning that Israel has been taken over by "dangerous and extreme elements".
It comes as Prime Minister Benjamin Netanyahu seeks to bring hardliner Avigdor Lieberman into the coalition, possibly as defence minister."
Readers are told that:
"The deal would shore up Mr Netanyahu's one-seat majority in parliament. […]
If his [Liberman's] six-seat Yisrael Beiteinu party joins the coalition, it will become the most right-wing in Israel's history."
In fact, the day before this article was published, Yisrael Beiteinu had already become a five-seat faction due to the resignation from the party (but not from the Knesset) of MK Orly Levy-Abekasis.
Remarkably, BBC audiences were not provided with the full information concerning the sequence of events which preceded Ya'alon's resignation, the Zionist Union party'sinternal turmoil or even the dabblings of John Kerry and Tony Blair in internal Israeli politics. The BBC did however find it essential to tell readers where Liberman was born and where he (but not any of the other politicians mentioned) resides.
"Moldovan-born Mr Lieberman, who lives in an Israeli settlement in the occupied West Bank, advocates a tough line towards dealing with the Palestinians, including the overthrow of Gaza's Hamas rulers."
In addition to the mention of "dangerous and extreme elements" in the article's revised opening paragraph (but without clarifying Ya'alon's reference to his party), the article made sure that readers went away with a very particular interpretation of the story.
"The two men had publicly disagreed after Mr Yaalon backed a senior military figure who had made controversial remarks about perceived extremist trends in Israeli society on Holocaust Day earlier this month.
Right-wing political figures have also criticised Mr Yaalon for backing a decision to charge an Israeli soldier who killed a wounded Palestinian attacker in March, in a case which split opinion in Israel.
At a news conference on Friday, Mr Yaalon said: "I fought with all my might against manifestations of extremism, violence and racism in Israeli society, which are threatening its sturdiness and also trickling into the IDF [Israel Defence Forces], hurting it already," Haaretz newspaper reports."
The BBC did not find it necessary to quote additional parts of Ya'alon's announcement.
"In general, Israeli society is a healthy society and its majority is sane and seeks a Jewish, democratic and liberal state. A state which accepts all kinds of people with no distinctions of religion, race, sex, ethnic origins or sexual orientation." [translation: BBC Watch]
The article closes with a typically whitewashed portrayal of the termination of the last round of talks between Israel and the PLO.
"France recently announced it would host an international conference on 3 June to try to revive Israel-Palestinian peace talks, which collapsed amid acrimony in 2014."
BBC audiences are not informed that Israel and the PLO are not among the twenty countries invited to participate in that conference.
Posted by Unknown at 6:15 PM