Mordechai Kedar, born in 1952 in Tel Aviv, is an Israeli scholar of Arabic literature and a lecturer at Bar-Ilan University, where he earned his PhD. Kedar is an academic expert on Arab affairs and served for twenty-five years in IDF Military Intelligence. He is one of the few Arabic-speaking Israeli pundits regularly seen on Arabic satellite channels defending Israel.” 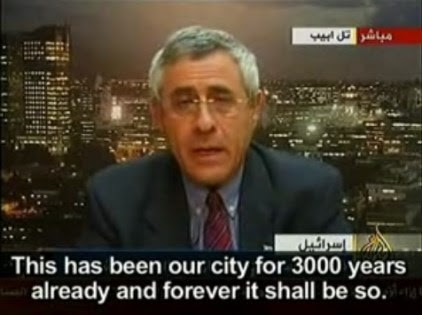 Kedar  is the blunt that truth that the pan-Muslim demand that Al-Quds (Arabic name for Jerusalem) must be the capital of the State of Palestine, not because Jerusalem is (Sunni) Muslim’s third holiest city, but because locating their capital in Jerusalem would signal the triumph of Islam over its original and primary adversary, Judaism.

Kedar explained that there is no mention at all in the Koran of Jerusalem. References to Jerusalem appear in the Hadith, the stories told about Mohammed which were eventually written down. In 622 CE, Mohammed first tried to convert the monotheistic Jewish tribes of Mecca to his religion. He directed that Muslims should pray towards the Temple Mount in Jerusalem, until it was clear that the Jews rejected his teachings. (Mohammed then switched the direction for prayer to Mecca.) The pagan Arabs also rejected his religion, calling it nothing new, but a rehash of Judaism and its more popular offshoot, Christianity.

Mohammed then left Mecca and went to Medina, where he was successful in finding converts. By the time of his death in 632, his followers had become a large army which would conquer vast lands to the east and the west, spreading the new faith by the sword. Mecca was the new Jerusalem, as Mohammed had originally planned.

From the Muslim conquest of Jerusalem (637 CE), except for a brief time during the Crusader period, Muslims ruled over Jerusalem, which became important as an Islamic holy site during the rule of the Umayyad dynasty (661-750 CE). The Damascus-based Caliph Abd al-Malik consolidated his leadership by establishing a place of worship for his followers in Jerusalem, which was closer to the center of the Caliphate than Mecca. He built the Dome of the Rock (Masjid Qubbat As-Sakhrah) in 688-91 CE on the spot where the Jewish Temples had stood.

In 715 CE, the Umayyads built another mosque on the Temple Mount which they named the Masjid al Aqsa (The Furthest Mosque) to signify the “furthest mosque” alluded to in the Koran. During this period, the obligatory pilgrimage for Muslims, the haj, could be made to Jerusalem in place of Mecca.

Kedar  argued that there is an explicit text acknowledging that the Holy Temple sat on the site of the Dome of the Rock. In 1924 (and in subsequent years), the Supreme Moslem Council published an English-language tourist guide to the Temple Mount. It was entitled “A Brief Guide to al-Haram al-Sharif [Temple Mount],” which states:

“The site [of the Dome of the Rock and al-Aqsa mosque] is one of the oldest in the world. Its sanctity dates from the earliest times. Its identity with the site of Solomon’s Temple is beyond dispute. This, too, is the spot, according to universal belief, on which David built there an altar unto the Lord, and offered burnt offerings and peace offerings.” (templemountguide.wordpress.com)

This publication was during Haj Amin al-Husseini’s time as the Grand Mufti of Jerusalem. Yet, a few years later, Husseini and others began to promote Jerusalem’s role as “The Third Holiest Site in Islam” in mainstream Islamic writings, claiming that there had never been a Holy Temple in Jerusalem.

In 1917, Britain and the Allies defeated Turkey, ending the Ottoman Turk caliphate in the Middle East. Five years later, the British were given the Mandate for Palestine by the League of Nations, in which the Jews were promised a “national home.” By this time, Jews were the majority in Jerusalem. Many Jews had immigrated to Palestine, principally from Europe, in waves of aliyah even before the Mandate period, bringing economic and human capital to the undeveloped, underpopulated region. The burgeoning economy also attracted Arabs to immigrate in large numbers.

British rule over Palestine ended in 1948, at which time Israel declared its independence and was invaded by the surrounding Arab states. When an armistice line, emphatically not a border, was drawn between the warring sides in 1949, Jordan occupied the mountainous regions of Palestine – Judea and Samaria – including the Old City of Jerusalem, but not the larger, modern Jewish part of the city. Just 19 years later, during the Six Day War, Israel liberated the territories occupied by Jordan (see my previous article “The Importance of Lexicon”) and reclaimed the Temple Mount, the holiest site of Judaism. Since then, the Muslims have insisted that Israel withdraw from its historical homeland of Judea and Samaria, which the Arabs claim has no Jewish history.

It is an inherent tenet of Islam that any land once ruled by Muslims remains Muslim land in perpetuity. Thus, all of “Palestine” is Muslim and the Jews must either leave or become subservient (dhimmis) to the Muslim authorities. This demand is non-negotiable and is the primary reason that peace initiatives continually forced on Israel by the West are futile.

Islam proclaims itself the only true faith, which will eventually establish a Caliphate over the globe. The internecine battles among Muslims are simply to determine which sect will control the Caliphate. With Jerusalem under Jewish control, the plan cannot succeed. But if the Jews can be forced out, Islam’s victory over Judaism will be complete and the focus will shift to Christian Europe, first those areas which were once under Muslim rule, then all of Europe and eventually, the United States.

As Kedar emphasized, the fight for Jerusalem is not because it is religiously significant to the Muslims, but because it is an indispensable building block for the conquest of Islam over its two predecessor religions, Judaism and Christianity.

Steve Kramer - THERE IS ONLY ONE ISLAM
Posted by Unknown at 7:31 AM