“Hazor formerly was the head of all those kingdoms”—thus wrote the chronicler of the Book of Joshua (11:10), and the source before him was undoubtedly reliable and accurate. During the 30 excavation seasons conducted at the site of ancient Hazor, it became clear that this was the largest and most important city-state in the Land of Israel in the second millennium B.C.E. At its floruit, Hazor spanned c. 200 acres, 10 times the size of Jerusalem in the days of King David and King Solomon.


The magnificent finds uncovered within the Ceremonial Palace of the Canaanite period point to extensive commercial, cultural and artistic ties with the centers of power in the region, from Babylon in the east, through the Hittite kingdom and Egypt, all the way to Cyprus and Greece in the west. Hazor’s days of grandeur came to an end with its fall into the hands of the Israelite tribes that settled the land.


The visitor to Israelite Hazor has the unique opportunity to witness the reliability of the Biblical historiography first-hand and to cast his eyes upon the structures attributed to the days of the monarchs of the Kingdom of Israel, from Solomon, through Ahab and Jeroboam II, until the days of Pekah son of Remaliah.


Amnon Ben-Tor, Professor Emeritus of the Archaeology of Israel at the Institute of Archaeology of the Hebrew University of Jerusalem, participated in the excavations of Yadin’s expedition to Hazor in the 1950s and 1960s. For the past 25 years he has directed the renewed excavations at the site.

Tel Hazor (Hebrew: תל חצור‎), also Hatzor and Tell el-Qedah, is an archaeological tell at the site of ancient Hazor, located in the Upper Galilee, north of the Sea of Galilee, in the southern Hula Valleyoverlooking Lake Merom. In the Middle Bronze Age (around 1750 BCE) and the Israelite period (ninth century BCE), Hazor was the largest fortified city in the country and one of the most important in the Fertile Crescent. It maintained commercial ties with Babylon and Syria, and imported large quantities of tin for the bronze industry. In the Book of Joshua, Hazor is described as “the head of all those kingdoms” (Josh. 11:10).

The Hazor expedition headed by Yigal Yadin in the mid-1950s was the most important dig undertaken by Israel in its early years of statehood. Tel Hazor is the largest archaeological site in northern Israel, featuring an upper tell of 30 acres and a lower city of more than 175 acres.

In 2005, the remains of Hazor were designated a World Heritage Site by UNESCO as part of theBiblical Tels - Megiddo, Hazor, Beer Sheba. 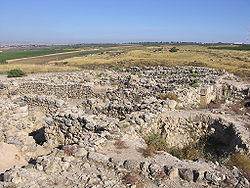 During the Egyptian Second Intermediate Period and early New Kingdoms (together running between 18th century BC and 13th century BC), Canaan was an Egyptian vassal state; thus 14th century documents, from the El Amarna archive in Egypt, describe the king of Hazor (in Amarna letters called Hasura), Abdi-Tirshi, as swearing loyalty to the Egyptian pharaoh. However, EA 148 specifically reports that Hasura's king had gone over to the Habiru, who were invading Canaan. In these documents, Hazor is described as an important city in Canaan. Hazor is also mentioned in the Execration texts, that pre-date the Amarna letters, and in 18th century BCE documents found in Mari on the Euphrates River.

According to the Book of Joshua Hazor was the seat of Jabin, a powerful Canaanite king that led a Canaanite confederation against Joshua, but was defeated by Joshua, who burnt Hazor to the ground. According to the Book of Judges Hazor was the seat of Jabin, the king of Canaan, whose commander, Sisera, led a Canaanite army against Barak, but was ultimately defeated.Textual scholars believe that the prose account of Barak, which differs from the poetic account in the Song of Deborah, is a conflation of accounts of two separate events, one concerning Barak and Sisera like the poetic account, the other concerning Jabin's confederation and defeat. In addition, the Book of Judges and Book of Joshua may be parallel accounts referring to the same events, rather than describing different time periods, and thus they may refer to the same Jabin, a powerful king based in Hazor, whose Canaanite confederation was defeated by an Israelitearmy. 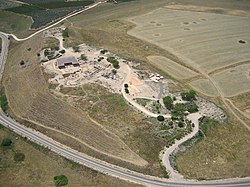 Israel Finkelstein claims that the Israelites emerged as a subculture within Canaanite society and rejects the biblical account of the Israelite conquest of Canaan. In this view, the Book of Joshua conflates several independent battles between disparate groups over the centuries, and artificially attributes them to a single leader, Joshua. Nevertheless, one archaeological stratum, dating from around 1200 BC, shows signs of catastrophic fire, and cuneiform tablets found at the site refer to monarchs named Ibni Addi, whereIbni may be the etymological origin of Yavin (Jabin). The city also show signs of having been a magnificent Canaanite city prior to its destruction, with great temples and opulent palaces,] split into an upper acropolis, and lower city; the town evidently had been a major Canaanite city. He theorized that the destruction of Hazor was the result of civil strife, attacks by the Sea Peoples, and/or a result of the general collapse of civilization across the whole eastern Mediterranean in the Late Bronze Age.

Amnon Ben-Tor of the Hebrew University of Jerusalem believes that recently unearthed evidence of violent destruction by burning verifies the Biblical account. In 2012, a team led Ben-Tor and Sharon Zuckerman discovered a scorched palace from the 13th century BCE in whose storerooms they found 3,400-year-old ewers holding burned crops; however, Sharon Zuckerman did not agree with Ben-Tor's theory, and claimed that the burning was the result of the city's numerous factions opposing each other with excessive force. 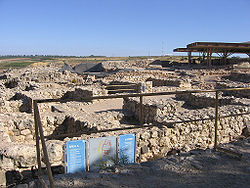 Chambered gate from the Israelite period.

The archaeological remains suggest that after its destruction, the city of Hazor was rebuilt as a minor village within "the territory of Naphtali" (Joshua 19:36). According to the Books of Kings, the town, along with Megiddo, and Gezer, was substantially fortified and expanded by Solomon. Like Megiddo and Gezer, the remains at Hazor show that during the Early Iron Age the town gained a highly distinctivesix chambered gate, as well as a characteristic style to its administration buildings; archaeologists determined that these constructions at Hazor were built by the same leadership as those at Megiddo and Gezer. Some archaeologists conclude that they were constructed in the tenth century by King Solomon; others date these structures to the early 9th century BC, during the reign of the Omrides.

Yigael Yadin, one of the earliest archaeologists to work on the site, saw certain features as clearly being Omride; Megiddo, Gezer, and Hazor, all feature deep rock cut pits, from the base of which were rock cut tunnels leading to a well that reached the water table, as water-supply systems, which Yadin attributed to the rule of Ahab; Yadin also attributed to Ahab a citadel, measuring 25 x 21 m, with two-meter thick walls, which was erected in the western part of Hazor. However, Yadin's dating was based on the assumption that the layer connected with the gates and administration buildings were built by Solomon.

Archaeological remains indicate that towards the later half of the 9th century BC, when the king of Israel was Jehu, Hazor fell into the control of Aram Damascus. Some archaeologists suspect that subsequent to this conquest Hazor was rebuilt by Aram, probably as an Aramaean city. When theAssyrians later defeated the Aramaeans, Hazor seemingly returned to Israelite control; Assyrian records indicate that Joash, king of Israel at the time, had paid tribute to Assyria and Israel had become an Assyrian vassal. Subsequently, the town, along with the remainder of the kingdom of Israel, entered a period of great prosperity, particularly during the rule of Jeroboam II. Some archaeologists attribute the later large scale constructions at Hazor, Megiddo, and Gezer, including the rock cut water supply systems, to this era.

Israel's attempted rebellion against Assyrian domination resulted in an invasion by the forces of the Assyrian ruler, Tiglath-Pileser III; the evidence on the ground suggests that hasty attempts were made to reinforce the defenses of Hazor. Despite the defences, in 732 BC Hazor was captured, its population deported, and the city was burnt to the ground.

The site of Hazor is around 200 acres (0.81 km2) in area, with an upper city making up about 1/8 of that. The upper mound has a height of about 40 meters. Initial soundings were carried out by John Garstang in 1926.

Major excavations were conducted for 4 seasons from 1955 to 1958 by a Hebrew University team led by Yigael Yadin Yadin returned to Hazor for a final season of excavation in 1968. The excavations were supported by James A. de Rothschild, and were published in a dedicated five volume set of books by the Israel Exploration Society.

Excavation at the site by Hebrew University, joined by the Complutense University of Madrid, resumed in 1990 under Amnon Ben-Tor.

Findings from the dig are housed in a museum at Kibbutz Ayelet HaShahar. In 2008, some artifacts in the museum were damaged in an earthquake.

In 2010, a clay tablet was discovered dating from the 18th or 17th centuries BCE inscribed with laws in the style of Hammurabi's Code. The document includes laws pertaining to body parts and damages, similar to laws such as "an eye for an eye" that appear in the Book of Exodus. The document is written in Akkadian cuneiform, the diplomatic language of the period.
Posted by Unknown at 3:03 PM