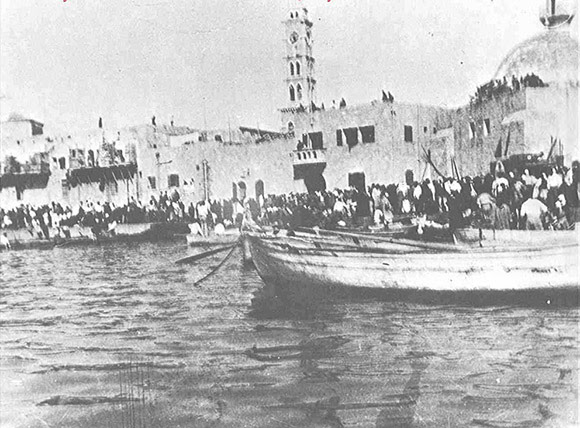 Palestinians driven into the sea at Jaffa Harbor, late April 1948. With the land routes cut off by the Haganah, tens of thousands of the citizens of Jaffa ...

Prior to Israel declaring independence on May 14, 1948, the War of Independence was already in full swing. Palestinian Arab irregulars and the Arab League’s Arab Liberation Army (ALA) had launched an attack on the Jewish Yishuv following the UN Partition Plan on November 29, 1947, and were battling Jewish forces for key strategic positions throughout the country.

Jaffa, the largest Arab town in Mandatory Palestine, was a key strategic spot as it overlooked Tel Aviv and potentially provided the Egyptian army with a stronghold for its looming invasion. Constant sniper fire from Jaffa had also succeeded in immobilizing many parts of neighboring Tel Aviv.

The Haganah devised a plan to conquer Jaffa by first taking all the surrounding villages and subsequently imposing a siege on the city. The operation, set to begin on the first day of Passover, was named Operation Hametz. The Irgun would lead the assault from the south breaking out of fortified positions in what today is the Tachana ( the Railway station). The Hagana would hold fast in fortified positions in Bat Yam to the north of Jaffa.

The Irgun (Etzel), however, was skeptical of this gradual plan as they argued it still enabled the Egyptians to reach Jaffa by sea and fortify the city. Therefore, Irgun commander Menachem Begin gave the order to launch a frontal assault.

On April 25, 1948, the Irgun launched an attack to take the city. 600 Irgun fighters – the largest open assembly of Irgun troops to date – commenced the attack but met harsh resistance and suffered many casualties.

On the second day of fighting, Menachem Begin issued a retreat order, but the soldiers on the front lines refused to retreat and continued fighting. On the following day, the Irgun’s Chief Operations Officer Amichai “Gidi” Paglin regrouped and formulated a successful tactic that utilized the Irgun’s expertise in explosives and enabled the fighters to win the city.

The victory, however, was not complete. Under orders from British Foreign Minister Ernest Bevin, who instructed to prevent the Jewish victory at Jaffa “at all costs,” the British army began to bombard the Irgun fighters with tanks and artillery in order to force Jewish forces vacate the city. Twice, Irgun fighters successfully repelled the British advance by demobilizing their tanks with a combination of explosives and Molotov cocktails.

After the successful Irgun defense, the British eventually capitulated to the fait accompli achieved by the Irgun and halted its attack. The fighting also catalyzed a mass exodus of Jaffa’s Arab inhabitants who fled the city on land and by sea.

Forty one Irgun fighters fell (over half of them in battle against the British) and over seventy five were wounded in the Battle for Jaffa. This was the last time the Soldiers in Zion went into battle without dog tags or proper listings . The battle resulted in a number of soldiers been buried unidentified .

Menachem Begin in a speech to the Irgun fighters on the eve of the attack:

“Soldiers of the Irgun!

We are going to conquer Jaffa. We are setting out on one of the decisive battles in the struggle for Israel's independence.

Know who stands before you, remember who you have left behind. You face a cruel foe, who wishes to destroy us. Behind you are our parents, our brethren, our children.

Strike at the foe! Aim well! Spare ammunition! In this battle, show no mercy to the enemy, as he knows none towards our people. Spare women and children. Spare the life of anyone who raises his hands in surrender. He is your captive. Do not harm him...”