Gays in Zion and Family Members..... Israel is to promote Gay Pride Tourism.


Israel to invest NIS 11 million in LGBT tourism. This is over and above Tel Aviv Municipalities Annual Sponsorship of another 10 million. Other sponsors include all the major banks and many of businesses and hotels in the White City of Zion.

When I married my Ex she mentioned that her brother Udi was Gay .... she used the perhaps derogative adjective a Homo. I grew up with a Gay Uncle, Uncle Sydney my Mom's only brother. I met and had the opportunity to frequently talk and interchange with his very long time Partner Michael,Gay and Lesbian friends... they tended to  be wonderful gushing conversationalist, generous , kind and nice to be with. When my Mom died  45 days after my daughter Kim's birthday both Uncle Sydney and Michael stepped up to the plate and became wonder substitute Grandparents to my daughter and son Jonathan and became known to them as Dod Shlomo and Dod Hakavod Michael. Gift small and large arrived weekly. A zillion pictures were sent to them in Nea Makri , an upmarket Marina,and Cape Town. They came of many visits to Zion, always  overweight with gift especially clothes ( both were in Fashion,journalism and retail) and my kids visited them in Greece and Cape Tow nat their retirement home in the Summer Residence in Nea .  Both traveled widely, Rome, Paris, Barcelona, Moscow,Thailand, China, Australia, India  Riga,Lilou, Krakow,Geneva, Berlin, Sweden, Norway,the UK and USA  and even the  North Pole , where they  had friends  that included  many famous fashion photographers There New Years Greeting Cards , rivaled those of the trespassers in Downing Street 10 and 11 ,  Windsor Castle and the Washington House whitewashed by history

. If you still have distaste in your mouth when seeing and reading about Gay Pride preferred sexuality. Take time and have a series of conversations with them. They are no different from us. They are Lawyers, Accountants , Doctors  even in Members of the Knesset in Zion ( there are now two) but most of all they are brothers and sisters and daughters and sons , uncles and aunts and in my case the wonderful parents of two of my nieces and nephews..

Following the annual success of Tel Aviv's Pride Week, the Tourism Ministry in Zion is developing a campaign to bring even more LGBT tourists to Israel year-round.

The Ministry of Tourism is preparing to invest an impressive NIS 11 million to promote LGBT tourism to Israel. The ministry is planning a campaign targeting multiple countries, including many in Europe, that is intended to promote Israel as a liberal country and entice members of the LGBT community to visit.

Tourism Minister Yariv Levin confirmed on Monday that his ministry, in conjunction with external organizations and in collaboration with the Tel Aviv Municipality, is examining the marketing plan for the LGBT community. However, unlike in past years, the plan is to extend beyond the Pride events during the month of June. The campaign's content and character has not yet been finalized, but its overriding goal is to increase LGBT tourism to Israel.

"We're building a plan for a long-term strategy," said the minister. "Different organizations that we work with have marked the LGBT community as one that has significant potential for growth, and I certainly want to break into larger numbers than we have today." 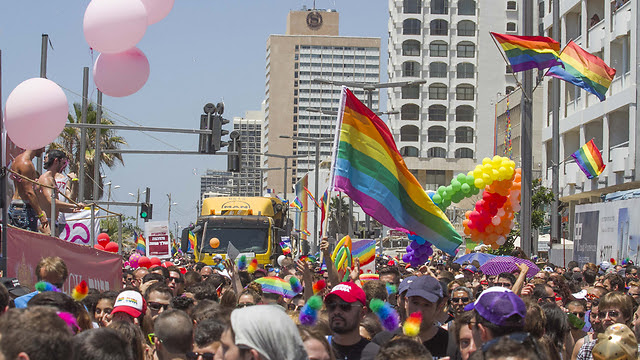 Levy further noted that, in recent years, thousands of young LGBT people have come to Tel Aviv's Pride events, and his ministry is aiming to produce additional, innovative marketing activities. 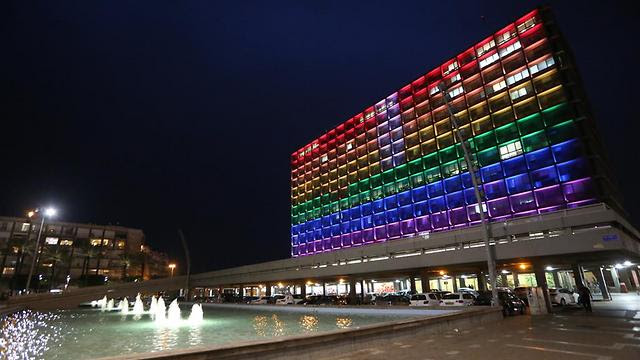 Tel Aviv City Hall lit up as a pride flag

At the world's largest tourism convention, ITB, which took place in Berlin at the beginning of March, Levin's Ministry sent in reinforcements to promote Tel Aviv's Pride parade: the drag queen Arie Oshri. Oshri, an Israeli, resides in Berlin. During the convention, he spoke with guests about Tel Aviv and what it has to offer A Ministry source explained that LGBT tourism is less influenced than other streams of tourism by security and economic events. Since they began promoting Tel Aviv as a liberal city about a decade ago, the source added, tourism to it has grown by hundreds of percent. All year long, LGBT tourists, mainly from Europe, come to visit for weekends in Tel Aviv and trips around the country.
Posted by Unknown at 1:05 AM