The Ancient Israelites settled the land of Canaan sometime between 1300 and 1200 BC. They traced their descent to a nomadic clan chief called Abram, several centuries before, who had migrated to Canaan from Mesopotamia. His descendants had then migrated on to Egypt. Here, according to their ancestral records, they had been mistreated and enslaved, before escaping en masse and moving back up to Canaan.

When they arrived in Canaan, the Israelites brought with them a unique cultural facet, monotheism. For the first time in history, as far as we know, a religion had appeared which concerned the worship of only one god. By implication, this god was the universal God, the One who controlled all things.

The only possible rival to the Israelite claim to have the first monotheistic religion in world history is found in the reforms of the Egyptian Pharaoh,Akhenaton (died c.1335 BC). These have often been interpreted to have promoted the worship of the Sun god, Aton, as the one god. However the information on these reforms is patchy, and it may have been as much a political revolution to undercut the power of the traditional priests as it was a religious one. In any case, it barely outlasted Akhenaton's death.

A New Ethics: The Ten Commandments

The Israelite religion was not just unique at that time in recognizing a single god. It also promoted an ethical system which required high standards of behaviour from the people. In short, they were required to treat each other - including women and foreigners - with respect and consideration.

An elaborate code of law would build up over time, constructed around ideas of fairness and justice. At the heart of this code lay the Ten Commandments, which have formed the foundation of Jewish, Christian and Muslim ethics ever since. 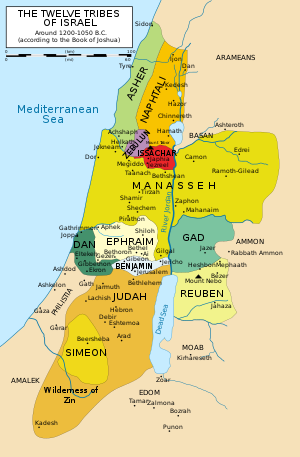 Confederation of The Tribes: The Kingdom of Ancient Israel

Initially, the Israelites formed a loose confederation of twelve tribes. National leaders, called judges, emerged from time to time to deal with particular crises. However, by 1000 BC the Israelites had established a kingdom, under their famous king, David. He and his son, Solomon, established their capital at Jerusalem, which also became the chief centre of the Israelite religion after Solomon built the only permitted temple there. One Plan of Solomon's Temple, as reconstructed from indications in the Bible

The kingdom shortly divided into two halves, and, thus weakened, the Israelites fell victim to the great powers of the region. The northern kingdom of Israel was conquered by the Assyrians in 722 BC, and the southern kingdom of Judah fell to the Babylonians in 586 BC.

During this period of division and decline, the Israelites developed a tradition of prophecy whereby a succession of men felt that they had been called by God to speak his messages to the people. These men came from different backgrounds, and clearly had different levels of education; but, in the course of warning the Israelites of impending doom unless they returned to obeying God, they developed a consistent religious philosophy. This revolved around a set of ideas based on the proposition that God was not just the one true God; he was also a God of love; that he required, not just religious ceremonial, but a worship of the heart, and one rooted in the "good life" - a life lived with generosity, mercy and love. 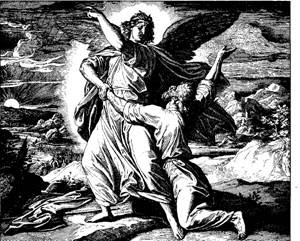 After the destruction of the kingdom of Judah, many of its inhabitants - thenceforth known to history as the "Jews" - were taken off to exile in Babylonia. There, the prophetic tradition continued, and the Bible (or Old Testament, as Christians know it), began to take shape as the Jewish laws, prophecies, psalms and other literature were written down. When the Persians conquered the Babylonians, their king, Cyrus, restored the Jews to their homeland (538 BC), and allowed them to rebuild their temple.

Within a hundred years or so of the return from exile, the Jews had completed their scriptures, and so laid the foundations for later Judaism. Out of Judaism sprang Christianity, the main religion of Western civilization.

Nationalism and the Art of Rebellion and Revolt  Losing a homeland

The Jews themselves remained in their homeland until the Roman period. Indeed, for a period, they ruled their own independent kingdom (164-63 BC). However, the Romans placed them under the control of the family of Herod, who, although Jewish by religion, was of foreign origin. This, and the fact that the Herodians lived lives more like pagan Romans than pious Jews, meant that they were never truly accepted by the Jews as their rightful rulers. In any case, around 6BC, Judaea was placed under direct Roman rule (though outlying regions remained under the rule of Herodian puppets).

The Jews deeply resented being under Roman power, and in AD 66, rose in revolt. This was an unmitigated disaster, leading to complete defeat and the destruction of the temple in Jerusalem. Another revolt in AD 115 led to the Jews being prohibited from living in Judaea. By that time, in fact, there were many more Jews living outside Judaea than inside it; however, this prohibition marks the true start of the "Diaspora", the scattering of the Jews amongst the nations.

Commercial Glass in the Ancient Startup Nation of Zion

The oldest glass kilns ever discovered in Israel were unearthed at the foot of Mount Carmel near Haifa - exposing an ancient, global glass-production center which serviced the entire Roman Empire.
The extraordinary archaeological discovery was revealed during an Israel Antiquities Authority excavation prior to the construction of a road being built at the initiative of the Netivei Israel Company. During the excavation, carried out as part of the Jezreel Valley Railway Project between Ha-‘Emekim Junction and Yagur Junction, remains of the oldest kilns in Israel were discovered, where commercial quantities of raw glass were produced.

These kilns are roughly 1,600 years old (dating to the Late Roman period), and indicate that the Land of Israel was one of the foremost centers for glass production in the ancient world. 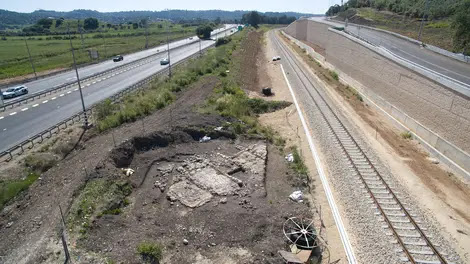 The kilns that were exposed right next to the train tracks. Photo: Assaf Peretz, courtesy of Israel Antiquities Authority.

According to Yael Gorin-Rosen, head curator of the Israel Antiquities Authority Glass Department, "This is a very important discovery with implications regarding the history of the glass industry both in Israel and in the entire ancient world."

"We know from historical sources dating to the Roman period that the Valley of Akko was renowned for the excellent quality sand located there, which was highly suitable for the manufacture of glass," she added. "Chemical analyses conducted on glass vessels from this period which were discovered until now at sites in Europe and in shipwrecks in the Mediterranean basin have shown that the source of the glass is from our region.

"Now, for the first time, the kilns have been found where the raw material was manufactured that was used to produce this glassware." Small fragments of the raw glass as they were found at the site. Photo: Shmuel Magal, courtesy of Israel Antiquities Authority.

The excavation of the kilns has caused great excitement in recent weeks among glass researchers throughout the world, some of whom have come especially to Israel in order to see this discovery first hand.
Professor Ian Freestone of the University College London, who specializes in identifying the chemical composition of glass, described the find as "a sensational discovery."

"It is of great significance for understanding the entire system of the glass trade in antiquity," Freestone said. "This is evidence that Israel constituted a production center on an international scale; hence its glassware was widely distributed throughout the Mediterranean and Europe." This enormously important site was discovered by chance last summer by archaeologist Abdel Al-Salam Sa‘id, an inspector with the Israel Antiquities Authority. While overseeing infrastructure work being conducted on the new railway line from Haifa to the east, Sa'id suddenly observed chunks of glass, a floor and an ash layer inside a trench. He immediately halted construction work at the site and began preparations for an archaeological excavation, the important results of which are now evident.

According to Sa‘id, "We exposed fragments of floors, pieces of vitrified bricks from the walls and ceiling of the kilns, and clean raw glass chips. We were absolutely overwhelmed with excitement when we understood the great significance of the find."

The kilns that were revealed consisted of two built compartments: a firebox where kindling was burnt to create a very high temperature, and a melting chamber in which the raw materials for the glass (clean beach sand and salt) were inserted and melted together at a temperature of 1,200 C degrees. The materials were heated for a week or two until enormous chunks of raw glass were produced, some of which weighed in excess of ten tons. At the end of the manufacturing process the kilns were cooled; the large glass chunks that were manufactured were broken into smaller pieces and were sold to workshops where they were melted again in order to produce glassware. 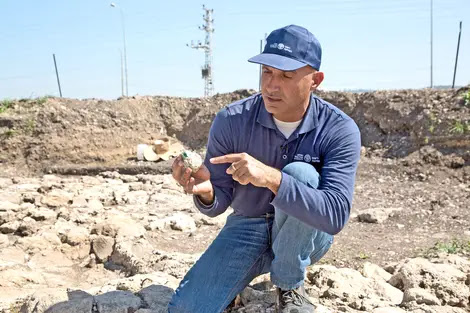 During the Early Roman period the use of glass greatly expanded due to its characteristics: its transparency, beauty, the delicacy of the vessels and the speed with which they could be produced by blowing – an inexpensive technique adopted at the time that lowered production costs. Glass was used in almost every household from the Roman period onward, and it was also utilized in the construction of public buildings in the form of windows, mosaics and lighting fixtures. Consequently, large quantities of raw glass were required which were prepared on an industrial scale in specialized centers. The installation that was discovered in the excavation is an example of one of these ancient production facilities.

According to a price edict circulated by the Roman emperor Diocletian in the early fourth century CE, there were two kinds of glass: the first was known as Judean glass (from the Land of Israel) and the second was Alexandrian glass (from Alexandria, Egypt). Judean glass was a light green color and less expensive than Egyptian glass. The question was: Where were the centers that manufactured this Judean glass that was a branded product known throughout the Roman Empire, and whose price was engraved on stone tablets so as to ensure fair trade?

The current discovery completes the missing link in the research and indicates the location where the famous Judean glass was produced.

In a few months time the public will be able to see this discovery first-hand when it will be exhibited at the "Carmel Zvulun" Regional High school, in the Zevulun Regional Council. 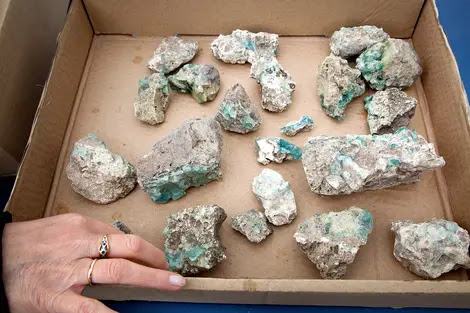 Glass production kilns that date to the sixth or early seventh century CE were previously found at Apollonia in Herzliya and dated from some 200 years later than the current discovery. The largest glass production facility from antiquity that has been found so far was exposed in the Bet Eliezer neighborhood in Hadera where it was dated to the seventh/eighth centuries CE, and the latest evidence we have of glass production in the country was revealed at Bet She‘arim (next to Khirbat ‘Asafna), dated to the late eighth and early ninth centuries CE.

The kilns that were just recently found are the earliest ones to be discovered so far in Israel. What's more, their relatively good state of preservation will make it possible to better understand the production process. Researchers now hope that by means of its chemical composition they will be able to trace the export of the glass throughout the Roman Empire.

The raw glass industry at Khirbat ‘Asafna was part of an extensive industrial zone where there were oil presses, wine presses and a glassware workshop which was excavated in the 1960’s by an American archaeological expedition. Researchers from overseas who came to Israel to get a first-hand impression of the discovery. Professor Ian Freestone of the University College London appears in the picture. Photo: Shmuel Magal, courtesy of Israel Antiquities Authority.
Posted by Unknown at 6:40 AM